World Cup Qualifying: USMNT Prepares For Final Window With Spot In Qatar On The Line 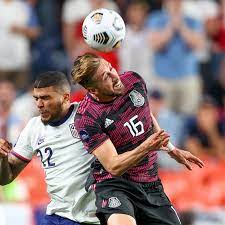 Away Matches In Mexico And Costa Rica Will Determine The U.S.’s Fate

It all comes down to the next seven days.

What is set to be a generation-defining window kicks off Thursday as the USMNT finds itself in a battle to qualify for the 2022 World Cup in Qatar kicking off in November.

No country from CONCACAF has punched its ticket to Qatar yet as five nations battle for four spots, three auto qualifiers and a playoff spot. The nation in the playoff spot will have to play New Zealand in a one-off playoff in Qatar for the final spot in the field of 32.

It’s crowded at the top of the table with Canada leading with 25 points, U.S. and Mexico in second and third with 21 points, followed by Panama in the playoff spot with 17 points. Costa Rica sits in fifth with 16 while the other nations in qualifying have been mathematically eliminated.

In a qualifying campaign that started in September 2021 there have been plenty of ups-and-downs – The US have looked hit or miss of late stumbling to a poor 2-0 loss to Canada during the last window in Hamilton, ON – but this remains a young side looking to seal the deal and return the USMNT to the World Cup after missing 2018.

The U.S. will face arguably its toughest stretch to see out qualifying and depending on other results will need to pick up 6 of 9 available points to clinch a spot. This round of matches features a tough trip to Mexico, a harsh home battle with Panama and a trip to always-tricky Costa Rica.

Kicking off the do-or-die seven-day campaign is a daunting task in Mexico City against Mexico. Of late the U.S. had had its southern neighbors’ number, beating them three times in 2021, most recently in November, 2-0, in Cincinnati. The U.S. enters Estadio Azteca last having drawn, 1-1, at Mexico’s futbol palace.

Overall, the USMNT is 0-8-3 at Azteca but has done better in recent years, managing a scoreless draw in 2013 and a 1-1 draw in 2017, This time, however, Mexico is the one fighting for its life, sitting third behind the U.S. on goal difference.

Following the clash with Mexico the USMNT returns home to play Panama in Orlando. The U.S. are unbeaten in 21 games on home soil – a promising stat – but Panama is equally desperate as it fights to qualify for back-to-back World Cups. Panama beat the U.S. 1-0 when the sides clashed in Central America in October.

The U.S. wraps up the qualifying campaign with a difficult trip to Costa Rica. Head coach Gregg Berhalter and his players will want to have qualified by the time they head to Central America.

During the USMNT’s last qualifying trip to Costa Rica, the Stars and Stripes were battered 4-0. It was the result that led to the firing of Jurgen Klinsmann and left the program adrift ahead of World Cup 2018 qualifying.

Berhalter has called one of his stronger squads for this important window, including European-based stars Christian Pulisic and Tyler Adams.

The group took a hit, however, when Sergino Dest’s injury prevented him from joining the camp, and George Bello replacing him brings questions. Ethan Horvath looks to be the man between the sticks as concerns linger regarding Zach Stefan’s fitness.

The USMNT missing the World Cup (again) would not be a good look for a country playing the role of lead host for the world’s show piece football event in four years’ time. Failing to qualify for this year’s iteration in Qatar cannot happen.

Berhalter and his selections will have to step up and get the job done as now is the time to show the progress the U.S. men’s program has made since that awful night in Trinidad.

It’s three games with one goal: to punch a ticket to Qatar.

Robbins is a native of New York City and a student at University of Alabama. He writes about the United States Men’s National Team for L.A. Soccer Press. Follow him on Twitter @nickrobbins12.