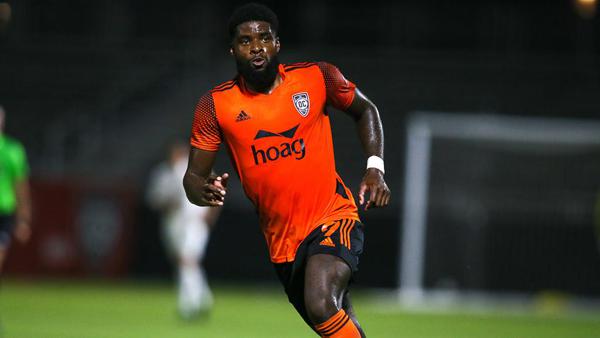 The defending champions unveiled their 2021 USL Championship winners banner before a crowd of 5,061, the sixth-largest in OCSC history. One of the spectators was the mayor of Irvine, Farrah N. Khan, who enjoyed the festivities and watched OCSC claim a victory at home.

The first half ended in a stalemate with not much to show for OCSC but the Men in Orange gained an advantage early in the second half when RGVFC’s Emilio Ycaza received a red card after seeing his second yellow card in the 55th minute for dissent.

OCSC played the last 35 minutes of the match with an extra man, and in the 71st minute Erick “Cubo” Torres got substituted as Okoli came on.

In the 79th minute, Milan Iloski’s right-footed shot from a direct free kick outside the penalty area jolted the crossbar before RGVFC’s defense blocked two successive shot attempts from OCSC.

Having worked a corner kick, Okoli scored on a header that arched over RGVFC goalkeeper Colin Miller and lodged into the top right corner. The lead would only last 7 minutes, however, after RGVFC capitalized on an OCSC defensive blunder with Seth Casiple losing control of the ball to Ricky Ruiz near the OCSC box.

Ruiz, the Southern California native, threaded the ball to Frank López, who cut outside and curled a left-footed shot into the bottom right corner past the outstretched hands of OCSC goalkeeper Patrick Rakovsky.

The referee added seven minutes to the second half of stoppage time after several injury delays, allowing OCSC to mount another wave of counterattacks until finding the match-winner.

Additional injury delays added 2 more minutes to stoppage time and in the 99th minute, OCSC created an opening and found a way to come away with all the spoils in front of a home crowd.

Tommy McCabe curled a ball into the box which fell to Okoli, who controlled the ball and launched the ball past RGVFC’s Miller and into the bottom left corner.

Okoli raced to celebrate with his teammates surrounding him while RGVFC’s players looked on in bewilderment at the sequence of events that had unfolded.

NOTES: The win puts OCSC at 1-0-1 on the season following the loss in the season opener away at Colorado Springs Switchbacks FC on March 12. The win is the first without Ronaldo Damus, who transferred to Swedish side GIF Sundsvall on March 17. OCSC is on the road next to play New Mexico United on Saturday, March 26. Coverage begins at 3:00 PM PT on ESPN+.