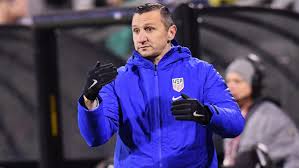 Predicting The 18 That Will Represent The USWNT In Japan

Speculation around the USWNT has been trying to figure out who Vlatko Andonovski will name to the Olympic roster. The fact of the matter is that it probably doesn’t matter who they take, they’ll still be the heavy favorites and should win gold.

The Olympic roster will be 18 and four alternates, meaning that Andonovski has a bit of an impossible decision trying to narrow the talent down. He has to decide if he takes experience over youth a bit in this one.

Ahead of the official announcement tomorrow, we give our prediction.

This is the easiest position to figure out. Sure there is a ton of goalkeeper talent in the pool but Alyssa Naeher is the number one and Franch seems to have cemented her spot as the backup.

The starters will be O’Hara, Sauerbrunn, Dahlkemper, and Dunn that much is a lock. The rest of the group is a bit harder to predict. It seems from the recent friendlies that Sonnett is a favorable selection, I don’t know if that’s the correct choice but it does seem to be like she’s in. With the midfield as talented as it is that could only leave one defender spot left and it’s likely that Davidson will get the nod. I think that Midge Purce should be selected over Sonnett and I won’t be super surprised if it happens.

Sam Mewis is the best player in the world right now and Horan and Lavelle have been terrific for the USWNT. Kristie Mewis should be included, her journey back into the USWNT fold has been incredible and she’s been playing lights out for both club and country. She can be the sub that the team will need during these quick turnaround times but also a starter if called upon as well. If K. Mewis is not included; it will be a big mistake on Andonovski’s part. Heath and Ertz are both currently still injured, when Ertz went down they knew that she would be healthy for the Olympics so that shouldn’t be a big concern. Heath, on the other hand, hasn’t played in months so it’s hard to gauge how ready she is but I don’t see a very likely scenario where she’s left off.

This group will be full of veterans. Morgan has proved she’s playing some of her best soccer since having her daughter. Rapinoe and Press have been next level for the U.S. Lloyd seemed to secure her spot during the last couple of friendlies for the USWNT.

If Midge Purce is in the 18 then Sonnett will slide into that alternate position. Macario hasn’t quite broken into the USWNT like it was expected but she’ll be an alternate more than likely.

Toney holds a BA in Journalism from Virginia Tech. She is Managing Editor of L.A. Soccer Press.