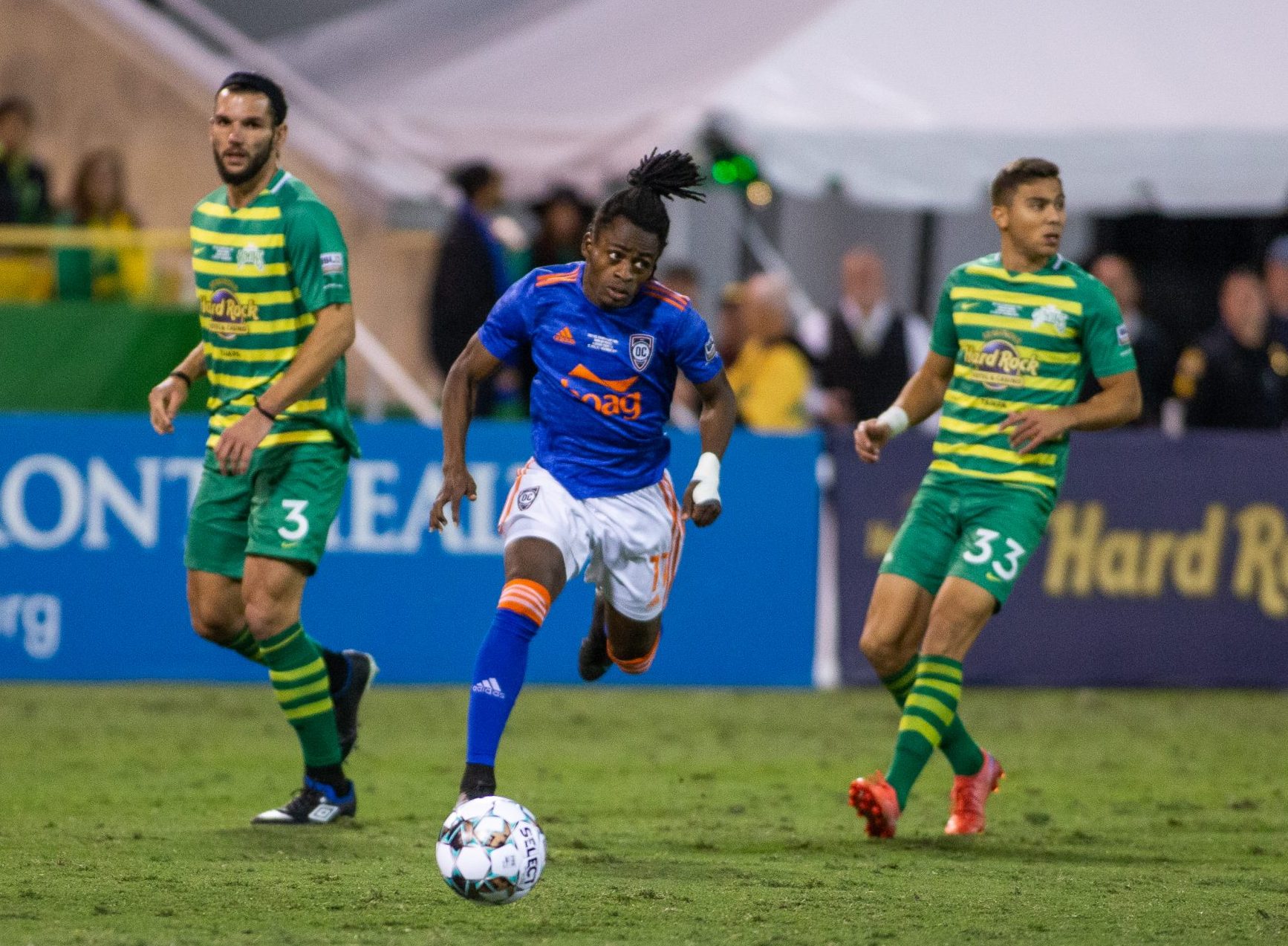 On Wednesday, March 17, Orange County SC announced that Ronaldo Damus joined Swedish side GIF Sundsvall on a permanent transfer. Damus was a force to be reckoned with in his single season with OCSC, helping catapult them to the 2021 USL Championship title.

“I’m very thankful to Orange County SC for all of the opportunities they have given me to help me improve my skills on and off the pitch,” Damus said.

“To be given the chance to make my professional debut and win a championship last year along with winning the MVP, it was more than I can imagine. Now transferring to play in Europe is a dream come true. Those moments will never be forgotten, but will always be used as a tool for the future while playing on the stage in Europe.”

During the 2021 USL Championship season, Damus appeared in 31 matches, scoring 18 goals in all competitions and adding three assists. The 22-year-old finished the regular season with a team-leading 14 goals. During OCSC’s run in the USL Playoffs, Damus scored four out of the five goals OCSC converted in the playoffs. Most notably, his brace in the first half of the USL Championship final helped OCSC claim their first-ever USL Championship title. He also took home Finals MVP honors for his stellar performance in the final. During his time with OCSC, Damus also represented Haiti at the senior level for the Gold Cup Qualifying stages and the 2021 Gold Cup tournament.

Damus joined OCSC with the clear intention of further developing his skills under the coaching staff’s guidance. He wanted to prepare himself for the move to top-flight football in Europe. Damus joins an exclusive club of players to prove themselves with OCSC colors and complete a transfer move to a top tier club in Europe. In 2020, goalkeeper Aaron Cervantes became the first OCSC player to complete a transfer move to partner club Glasgow Rangers FC. In 2019, Bryang Kayo became the first OCSC player to complete an international transfer when he signed with Bundesliga side VFL Wolfsburg.

“I am thrilled that OCSC has once again successfully collaborated with a young, ambitious player to help him achieve his goal of playing first division soccer in Europe,” Owner and CEO James Keston said.

“As a fan of OCSC, I am disappointed to see Ronaldo leave us; but with exceptional young talents representing the OCSC first team, and a pipeline of exceptional youths coming up fast on our OCSC reserve team, OCSC will continue to deliver exciting young talent to the transfer market for years to come.”

“Transferring Ronaldo to GIF Sundsvall in the Allsvenskan, the top division in Sweden is another landmark moment for Orange County SC,” President of Soccer Operations and General Manager Oliver Wyss said.

“Ronaldo will definitely be missed on the field but his development is a credit to the entire club, technical staff and his teammates. We have dual ambition of winning Championships and developing young players in Orange County and Ronaldo’s success is the perfect proof of concept. We are excited for Ronaldo to have the opportunity to showcase his talent in Europe and he will always be remembered as an Orange County great.”

GIF Sundsvall plays in the Allsvenskan, Sweden’s first division. GIF Sundsvall was recently promoted to the Allsvenskan ahead of the 2022 season, which kicks off on April 2nd. The Swedish side has spent the offseason reconstructing their squad. To fortify their backline, Sundsvall already added 2021 USL Championship Defender of the Year Forest Lasso. The addition of Damus upfront rejuvenates their offense. This could lead to a goal-scoring frenzy for Damus if used correctly in the GIF Sundsvall system.

Bonetto is a student at CSU Long Beach. He covers Orange County Soccer Club for LA Soccer Press. Follow him at @tristanbonetto on Twitter