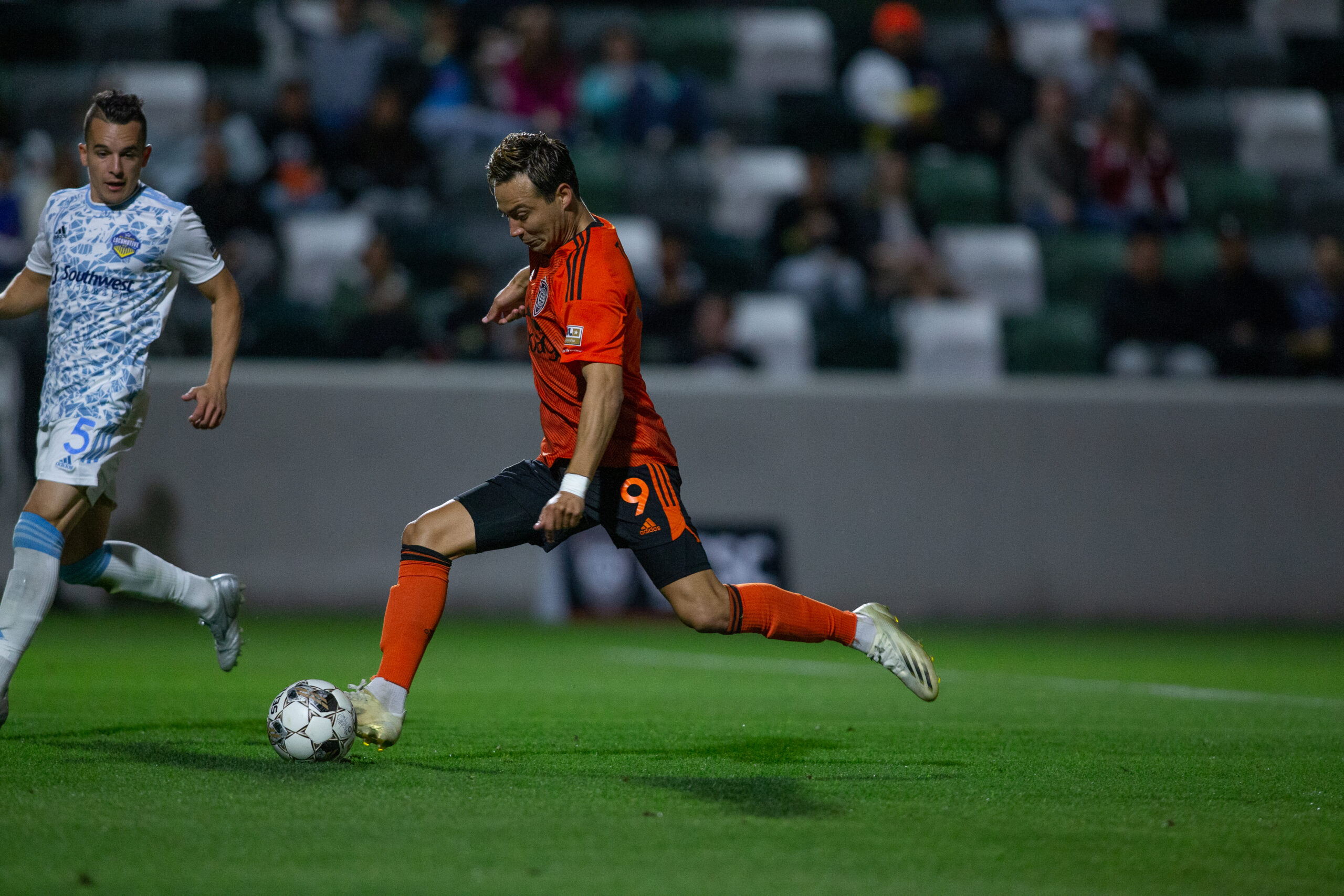 Goals from Milan Iloski and Erick “Cubo” Torres helped OCSC comeback from a goal down against El Paso Locomotive FC to draw 2-2 and come away with a point at Championship Soccer Stadium in Irvine on Saturday, May 21st.

OCSC opened the scoring in the 30th minute after some beautiful build-up play on the left flank. Seth Casiple set up Milan Iloski right outside the box with a cheeky chip pass. Iloski took a touch to set up his shot and drilled one towards the bottom left corner of the goal as it bounced past the EPLFC goalkeeper Evan Newton.

The match started off physical with three yellow cards in the first half, two for OCSC and one for EPLFC. EPLFC forward Nicholas Hinds would receive the first yellow card of the match in the 16th minute after a hard foul on Hunter Gorskie.

Milan Iloski had a great chance to double the lead just minutes before halftime as he attempted to dribble past two defenders for a breakaway but appeared to be fouled with no call from the referee.

The second half started as the match became more physical, and Torres had a golden chance to increase OCSC’s lead to two, but he wasn’t clinical enough. Incredible build-up play for OCSC set up Torres in the box in the 51st minute. Torres took a touch and shot the ball towards the bottom right corner as it rattled the post and bounced back into play.

EPLFC would take advantage of the missed chance as they would score a minute later on a counterattack to make it 1-1. In the 52nd minute, Aaron Gómez played a through ball to Luis Solignac who took a couple of touches into the box and shot the ball as it rolled past Patrick Rakovsky into the bottom left corner.

18 minutes later in the 70th minute, EPLFC would take the lead.

Solignac intercepted the ball in the opposition’s box and passed it to Diego Luna in the middle of the box who took a first touch shot as it rolled in between Rakovksy’s legs and into the back of the net.

In the 78th minute, Torres brought OCSC level as he scored right in front of goal after a deflection in the box fell to his feet. In the 81st minute, Rakovsky came up with a crucial save to keep the match tied and salvage the point for OCSC.

Torres expressed his opinion on how he thinks the team has improved since the start of the season and the importance of picking up points.

“It’s very important to keep picking up points. I believe offensively we are getting to know each other better every day. Me, Milan [Iloski], and Ugo [Okoli] have a good amount of goals between us. Mikko [Kuningas], Seth [Casiple], and Brent [Richards] on the wings are providing [quality] assists,” Torres said.

“We are working very well as a team, and I believe the statistics show [how well we are doing]. So, we have to keep working, there is still a lot of the season remaining. We have to focus on continuing to pick up points and not losing. I think we’re on the right path [though].”

Milan Iloski reflected on his recent form, as he’s scored four goals in the past two matches. Iloski just wants to help out OCSC in any way he can. He provides goals, however, it’s more than just his prowess for goal scoring that makes him valuable to the team.

“It’s a good run of form, helping out the team. That’s my job here you know, work hard defensively, score goals, and help the team any way I can,” Iloski said. “Another goal for me tonight and ultimately a draw, but I think the performance could have been better. Ultimately, we want to win at home so it’s disappointing.”

With the draw, OCSC currently sits at 11th place in the USL Championship Western Conference.

OCSC’s next match is Friday, May 27th when they face off against Atlanta United 2. The match will be held at Fifth Third Bank Stadium in Kennesaw, Georgia, with kickoff at 4:30 PM PT. Then OCSC returns home to take on New Mexico United on Saturday, June 4th, with kickoff at 6:00 PM PT.