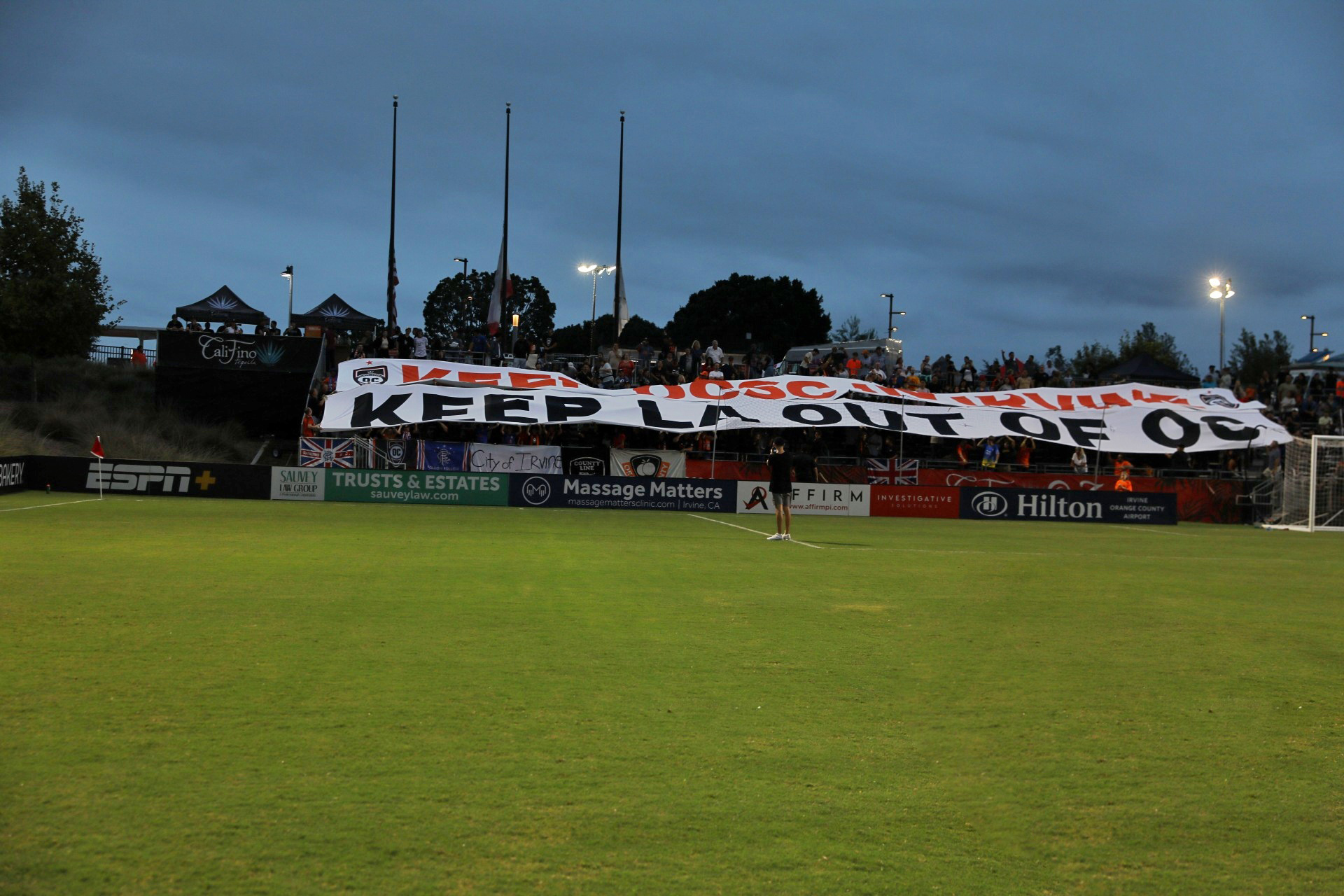 OCSC beat LA Galaxy II 1-0 on Saturday, September 10th, at Championship Soccer Stadium in Irvine, CA. A goal from forward Milan Iloski was the deciding factor in OCSC claiming a victory in the 405 derby.

The Orange County Coalition fan section showed out with banners reading “Keep Orange County in Irvine, Keep LA out of OC” in support of OCSC with the ongoing push from LA Galaxy owners to attempt to purchase Championship Soccer Stadium from the city of Irvine.

LA Galaxy II opened the match with promising chances that were thwarted by OCSC goalkeeper Patrick Rakovsky, with a bit of help from OCSC defender Daniel A. Pedersen.

In the 12th minute, Galaxy II midfielder Rémi Cabral set up midfielder Michael Salazar with a precise through ball. Salazar’s right-footed shot from inside the box was saved by OCSC goalkeeper Patrick Rakovsky but rolled between his legs heading towards goal. However, the ball was cleared off the goal line by Pedersen.

Nine minutes later, in the 21st minute, Patrick Rakovsky made a close-range save on Galaxy II forward Preston Judd’s shot by getting a glove on the ball to deny the attempt.

OCSC had an opportunity in the 29th minute after defender Ian Hoffman centered a ball that found forward Milan Iloski on the left side of the box. Unfortunately, Iloski’s headed attempt went over the crossbar and out for a Galaxy II goal kick.

The two teams returned from halftime, and OCSC head coach Richard Chaplow made a tactical change upfront to re-energize his squad for the second half. OCSC forward Sean “Ugo” Okoli was substituted on the pitch for forward Erick “Cubo” Torres.

In the 57th minute, Milan Iloski set up OCSC defender Alex Villanueva in the Galaxy II box, whose left-footed shot was parried away by Galaxy II goalkeeper Richard Sánchez.

In the 68th minute, OCSC were rewarded for their improved play in the second half. Forward Sean “Ugo” Okoli’s commanding volley from 25 yards out was saved by Galaxy II goalkeeper as it fell to forward Milan Iloski on the rebound. Iloski volleyed home the rebound to make it 1-0 for OCSC as the crowd exploded into joyous chants.

Four minutes later, Rakosvky kept the match at 1-0 with an incredible save in the 72nd minute. Galaxy II midfielder Talyor Davila set up Salazar in the box behind the OCSC defense, who took a commanding first-touch shot that was parried over the crossbar by Rakovsky.

Tensions started to rise as the Galaxy II couldn’t find an equalizer, as two players on the squad received red cards in two minutes. Forward Preston Judd was shown the first red card in the 74th minute after receiving his second yellow card, and defender Carlos Harvey was shown a straight red card in the 75th minute.

With the two-man advantage, OCSC held on to claim the much-anticipated 1-0 victory.

“I didn’t just leave [England] to come to a USL club. I came because I saw an opportunity and a project on the other side of the world that was exciting to me,” said head coach Richard Chaplow on why he signed with OCSC as a player in 2018. “I really wanted to be a part of something bigger than just a normal football club.”

“To be a part of that from the ground up is a very rare opportunity. I’m extremely privileged and proud to support them. And hopefully, you know, we continue to kick on as a club because where we’ve come from, what we’ve done in that six-year period has been phenomenal.”

OCSC hits the road for their next match-up as they travel upstate to take on Sacramento Republic FC. The match is on Sunday, September 18th, at Heart Health Park, in Sacramento, CA, with kickoff at 2:00 PM PST.

Their final match of the season will be their last home match when they face off against the visiting San Diego Loyal SC on October 1st.

Milan Iloski scored his 20th goal of the season, tying former OCSC forward Thomas Enevoldsen for the club’s single-season scoring record and extending his lead for the Golden Boot Race to three goals.

OCSC broke the club record for attendance at Championship Soccer Stadium for regular season and playoff matches with a crowd of 5,500 people.

Seth Casiple eclipsed 10,000 minutes played in the USL Championship when he came on the pitch as a substitute in the 63rd minute.