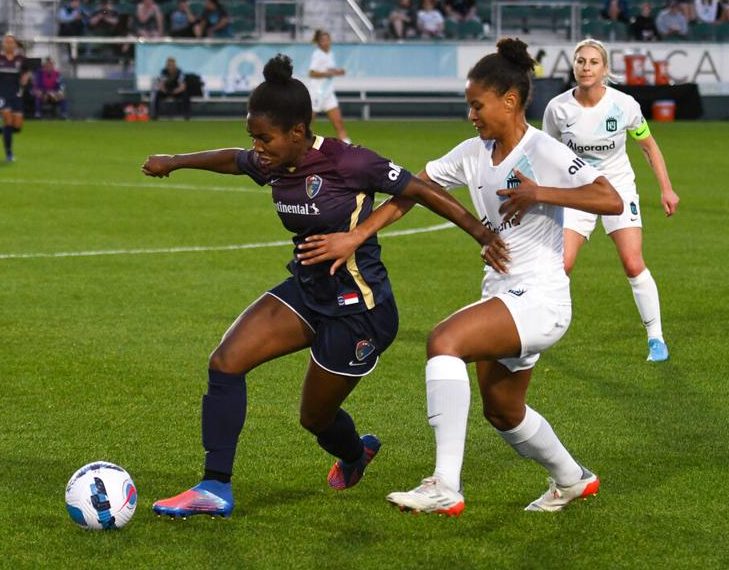 The Courage nearly conceded in the opening seconds of the match after Gotham forward Margaret Purce slipped in a through ball to Cameron Tucker and Tucker was left 1v1 with goalkeeper Katelyn Rowland. Tucker’s effort ended up slicing wide of the goal to stave off an early scare for the Courage.

In the 7th minute, Courage forward Taylor Smith was able to get her head on a cross from Merritt Mathias, but the effort ended up missing the target wide of the left post.

North Carolina Courage’s new signing Brianna Pinto opened the scoring in the 22nd minute with a brilliant header after she connected with a whipped cross from left back Carson Pickett. In her Courage debut, Pinto notched her first professional goal against her former team. Pinto was acquired from NJ/NY Gotham in exchange for $125,000 of allocation money on December 6th, 2021. The Durham native and former NCFC youth academy product was able to celebrate her homecoming and her first professional goal with teammates, family, and friends.

In the 25th minute, the Courage were able to produce another incisive piece of attacking play that nearly turned into a golden opportunity. Pinto clipped a through ball into the direction of forward Taylor Smith that would’ve set her up for a clear chance on goal, but Smith wasn’t able to get a touch to bring the ball down.

The Courage continued to find pockets of spaces in the attacking third and create opportunities as the first half wore on. On the defensive end, the Courage stayed relatively compact and was able to hold NJ/NY Gotham to zero shots on goal with the first half coming to a close.

Courage captain Abby Erceg extended the Courage’s lead to two in the 51st minute when she rifled a driven low strike into the corner after receiving a knock down from a corner.

Pinto attempted a curling effort in the 61st minute that slightly sailed over the crossbar and gave a real test to Gotham goalkeeper Ashlyn Harris.

Courage’s new signing Tess Boade made her NWSL debut after she was substituted on the pitch in the 62nd minute in place of Jaelene Daniels.

Courage left back Carson Pickett struck a great effort from outside the box in the 77th minute that drifted wide of the post.

Boade came close to opening her goalscoring account for the Courage in the 81st minute when her strike in the box from a tight angle lifted above the crossbar.

In stoppage time, Gotham goalkeeper Ashlyn Harris pulled off a stunning save on Courage midfielder Debinha’s glancing header to keep the two-goal margin.

The Courage were able to control the game from a defensive standpoint as well and protected their two goal advantage to see the match out.

An opening match victory for the Courage has placed the club at the top of the group in the East Division. Head coach Sean Nahas was extremely impressed with how the team managed and controlled the match for vast stretches of the match.

“You know, I think we were pretty comfortable,” Nahas said. “In many ways I felt our build was really good. I felt our positioning when we were in possession, to be able to minimize any type of risk, I thought was really good. We were just really well balanced and organized and we weren’t running out of areas, you know, in terms of leaving spaces open.”

Brianna Pinto spoke about her Courage debut and the surreal moment of her scoring her first professional goal in front of friends and family.

“I think it’s a dream come true,” Pinto said. “Having all of my family and friends in the stands and then just the support of my teammates. To score a goal against my former team meant a lot to me, because it’s my first professional goal and also my first start, so this is a big night.” Pinto said.

Courage captain Abby Erceg believed the team played extremely well and outperformed the level the team was playing at during preseason.

“I was just saying to some of the girls, that’s one of the best performances I’ve seen from us in a couple of years,” Erceg said. “I haven’t seen us play that well, in a long time. I certainly haven’t seen it in the preseason. So, I don’t know where that’s been hiding.”

The Courage will look to reproduce the same form in the second match of the NWSL Challenge Cup when the club takes on the Orlando Pride next week.