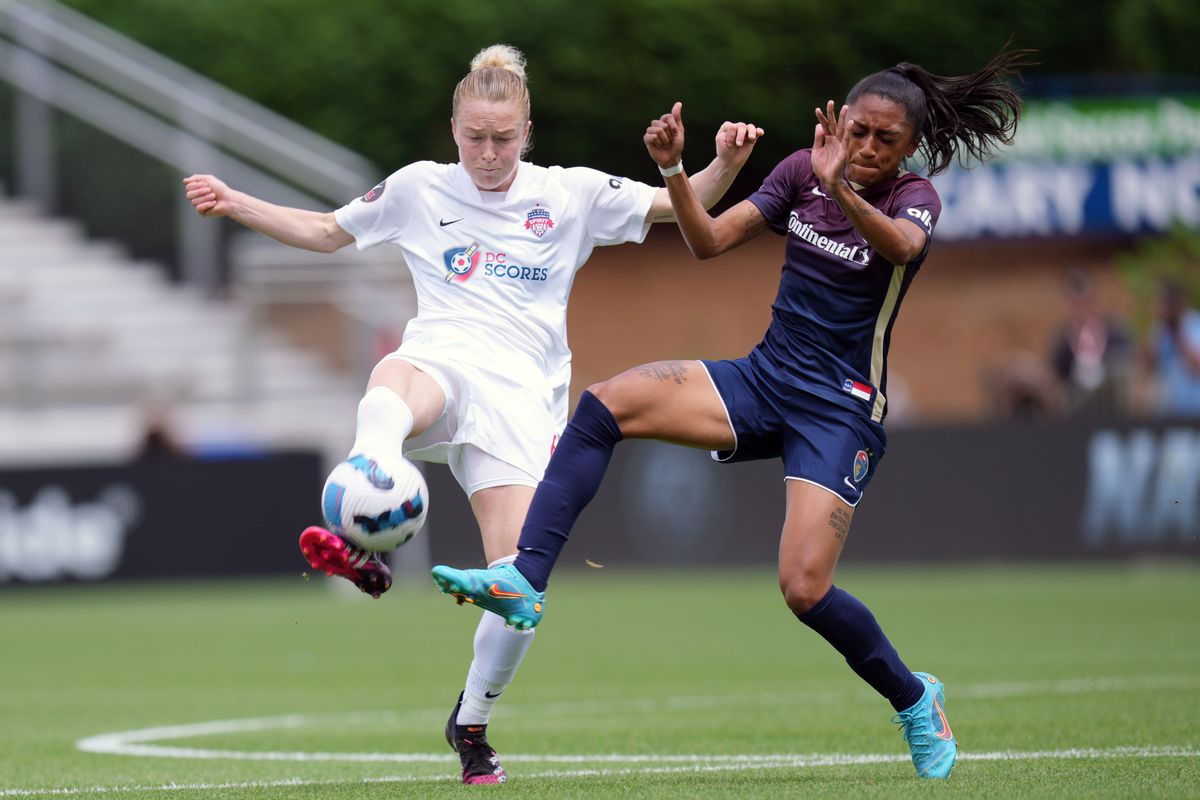 CARY, N.C – The North Carolina Courage capped off a strong start to the preseason by securing a 2-1 victory over the Washington Spirit to win the NWSL Challenge Cup on Saturday afternoon at Sahlen’s Stadium in WakeMed Soccer Park. A goal from Kerolin and an own goal were enough to give the Courage an advantage in a tense affair.

Emily Gray nearly opened the scoring for the Courage in the 8th minute when she hit a shot that fizzed over the crossbar and nearly tested Washington Spirit goalkeeper Aubrey Kingsbury early in the match.

Only two minutes later, Courage midfielder Debinha was able to execute a quick turn and create a counter attack while dribbling with the ball at pace. Debinha was able to slip in Kerolin and Kerolin’s strike ended up being slightly too powerful for Kingsbury’s outstretched hand that attempted to parry the shot.

In the 13th minute, the Courage nearly extended their lead to two goals from Emily Gray’s 1v1 attempt on goal. Kingsbury was able to pull off a quick reaction save to keep the deficit at one goal.

Courage right back Merritt Mathias swung in a great cross in the 30th minute that forward Kerolin wasn’t able to get a finishing touch as the ball swept across the face of goal.

Washington Spirit forward Ashley Hatch was able to equalize the match in the 35th minute after she was played through on goal from Trinity Rodman’s through ball. Hatch’s shot struck the post and trickled into the net past Courage goalkeeper Katelyn Rowland.

Gray nearly was able to put the Courage back in the lead again in the 42nd minute when a second chance attempt fell towards her, but her attempt ended up dragging wide of the post.

Kerolin was able to create another chance for the Courage in the 50th minute as she skipped past her marker on the wing and hit a shot towards the near post that was saved.

Courage left back Carson Pickett struck a great long range effort in the 55th minute that nearly tested Kingsbury but the shot ended up flying over the bar.

Forward Diana Ordoñez was not able to finish a big opportunity in the 65th minute as she couldn’t get her feet set to finish a pass that was played across goal by Debinha.

Shortly after in the 67th minute, Kerolin was brought down in the box as she was about to attempt a shot. Fans, the Courage coaching staff, and players immediately began inquests for the referee as to why a penalty was not given. Courage fans let out audible boos around the stadium after it was decided only a corner would be given.

Ordoñez was able to get a touch on a corner in the 70th minute that led Washington Spirit’s Taylor Alymer deflecting the ball into her own net and receiving an own goal to give the Courage a 2-1 lead.

In stoppage time, a collision between Debinha and Jordan Baggett left Baggett down on the pitch. Players immediately began calling for emergency medical assistance, but the medical crew for the ambulance was not moving fast enough to meet the needs of Baggett. Four Washington Spirit players ended up running over to the opposite corner of the pitch to grab the stretcher to speed the process up. Baggett was seen smiling and conscious when out on the stretcher. Baggett was immediately taken to WakeMed Hospital to be evaluated.

Washington Spirit head coach Kris Ward provided the update after the match and stated the only thing he was aware of was that they had departed to go to the hospital.

Ward added he was “proud” of his team for getting their teammate help in such a dire situation.

“The thing I was most proud of was seeing our players being so active in trying to get their teammates help,” Ward said. “That means more to me than anything.”

Courage head coach Sean Nahas started off his press conference by wishing Jordan a speedy recovery on behalf of the club.

Next, Nahas spoke about how tense the match was and the understanding of having two quality teams in the preseason finale would likely lead to a close match.

“We had a feeling that the game was going to go that way,” Nahas said. “I think it was a battle in the end that just came down to competing. Then, it’s just a matter of finding a way [to win].”

Nahas also spoke about the individual performance of Kerolin in the match. The 22-year-old was named MVP of the NWSL Challenge Cup final after her brilliant goal and overall play. After completing her move to the Courage in January, Kerolin looked sharp throughout the preseason.

“She’s maybe one of the best players in the league and we have her,” Nahas said. “She is a quality player and the best part for me it’s not just on the attacking side she defends so well. She works so hard. She loves this team. And, we love her.”

Courage captain Abby Erceg believes the match came down to fine margins and she believes fitness played a major role.

“Honestly, I think the quality of the game was quite low,” Erceg said. “You could tell the players were tired. It was just a matter of who was more fit.”

The Courage will be looking to continue the momentum of a strong preseason into the regular season when the club plays their second regular season match of the season against Gotham F.C in New York, on May 14th, at 7 p.m.