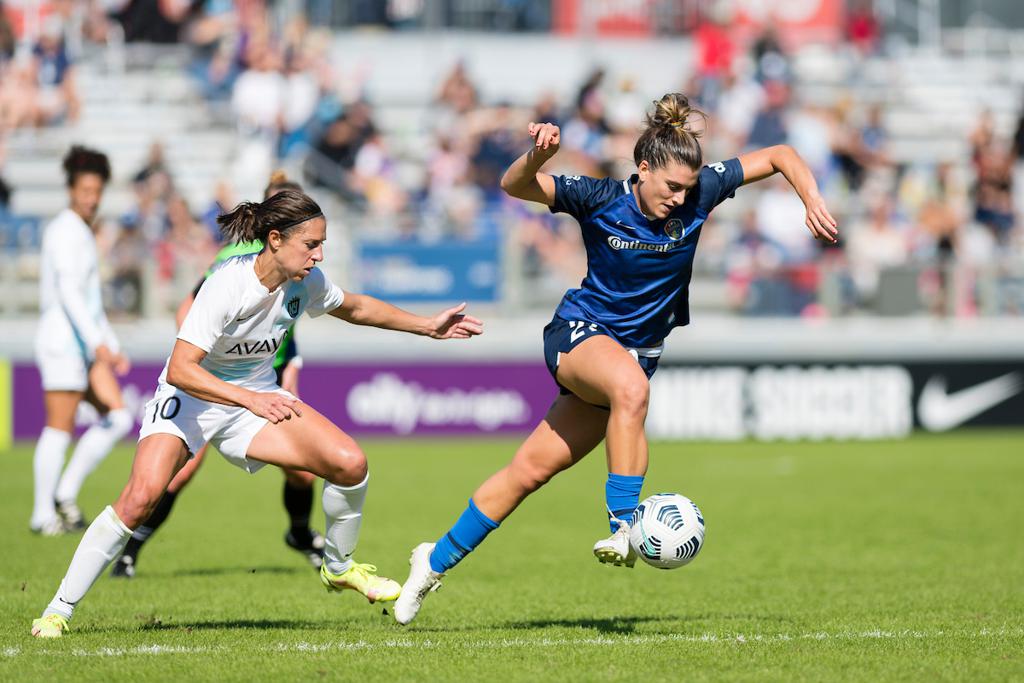 The 3-0 defeat at WakeMed Soccer Park sees NC Courage slip out of playoff places into seventh place, while Gotham’s win means it jumps into the sixth and final playoff spot in the league.

NC Courage’s Lynn Williams missed a sensational chance to open the scoring in the 12th minute as her shot dragged wide of the near post. Midfielder Debinha cut back the ball for Williams who sent the ball over the bar in the 23rd minute.

The Courage looked to play the ball in behind Gotham’s attacking full backs with through balls into wide positions. Courage midfielders Cari Roccaro and Denise O’ Sullivan were locked into an intense midfield battle with Gotham midfielders McCall Zebroni and Allie Long. Fast-paced transitions led to a number of quick counter attacks and exhilarating pieces of attacking play for both teams.

In the 32nd minute, Williams missed her third goal-scoring opportunity of the half as she sent her glancing header wide of the near post.

Gotham striker Carli Lloyd scampered past Courage defender Kaleigh Kurtz and unleashed a shot from a tight angle in the 34th minute that forced Courage goalkeeper Casey Murphy into a difficult near post save.

On the stroke of halftime, Gotham midfielder Nahomi Kawasumi whipped a ball across the face of goal, but striker Midge Purce was unable to get a final touch to tap the ball home.

In the 54th minute, Gotham left back Caprice Dydasko put a looping ball into the box that Roccaro struggled to deal with. Purce got first to the deflected ball and finished a one-time volley past Murphy on the edge of the six-yard box.

Lloyd looked set to double Gotham’s lead in the 57th minute when Kaleigh Kurtz produced a sensational last-ditch block to thwart the opportunity. Lloyd followed up with a shot from about 22 yards out in the 60th minute which drew another great save from Murphy.

Gotham doubled their lead in the 64th minute after Ifeoma Onumonu slipped past Kurtz in the box and struck a shot towards the near post that Murphy saved. Purce was able to get on the end of the rebound from the save and she poked it home into the roof of the net.

Lloyd extended Gotham’s lead to three after she struck a driven shot towards the side net that snuck past Murphy in the 66th minute.

Lloyd came close to adding another goal in the 83rd minute as her header in the six-yard box drifted just wide.

The U.S Women’s national team legend was substituted in the 89th minute to a rousing ovation from home and away fans as she is approaching retirement at the end of the season.

Courage defender Merritt Mathias also celebrated her 150th regular season start, and Amy Rodriguez made her 100th league appearance after being substituted on in the second half.

Gotham FC closed out their 3-0 lead to end the match and are likely to secure a playoff spot as they currently sit in sixth place in the league.

The Courage, who sat in third place in the league as recently as October 7th, are now astoundingly, likely to be looking at the playoff picture from the outside in. With the team currently in seventh place, the Courage would need Gotham to drop seven points across their next three matches just to have a chance at qualifying for the playoffs.

Goalkeeper Casey Murphy wants the team to stay focused heading into their final regular season match and not worry about the playoff race.

“As far as the standings go, we have gotten to a place where some things are out of our control now,” Murphy said. “For us, the focus has to remain on the last game of the season in Portland. Everything we do up until that point needs to be with the standard and just the attitude we set here.”

Courage interim head coach Sean Nahas believes the team started the match well, but the match got stretched as the game wore on which left gaps open throughout the pitch and the Courage still couldn’t find a goal.

“I felt in the first half we had three or four really good chances,” Nahas said. I felt we minimized errors. I feel our possession through the midfield has been decent. But the hardest thing to do is score goals. Scoring goals has been hard to come by at times, but that could happen with any team at any moment. We just have to keep processing everything, keep pushing, and keep figuring out ways we can grow.”

The Courage will play their regular season finale against Portland Thorns on Oct. 30 in Portland, OR.

Dakwa is a student at Elon University. He writes about professional soccer in North Carolina for L.A. Soccer Press. Follow him at @JDakwa on Twitter.