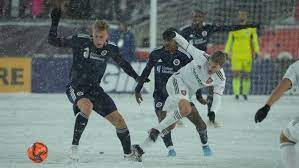 A Snowy Comeback, A Not-So-Championship Return For NYCFC And Diego Costa Got His First Goal In A Wild Week 3

Things looked good for New England 70 minutes through what can only be classified as a blizzard game at Gillette Stadium. The Revs boasted a two-goal lead and looked to be seeing the game out in the snowy conditions, but things changed when Real Salt Lake pounced and scored in the 78th minute. RSL followed another in the 88th minute and a third in 93rd minute goal to set of scenes of pure jubilation for RSL. On the other side, it’s an all-time collapse for New England, at home, in the weather, but it was a set piece and some nice bounces to set RSL’s Tate Schmitt up for the winner. What was a winter wonderland for Salt Lake, was a night to forget for New England.

The defending MLS Cup Champions returned home and unveiled an absolutely underwhelming banner before running Montreal off the park 4-1. The result was great, NYCFC controlled the game and looked good compared to the first two weeks. The benefits of regularly playing on a small field are clear, they controlled the possession and kept Montreal out of the match. The banner ceremony pregame was laughable as the Yankees show NYCFC no love despite NYCFC winning the same number of championships as tenets at the stadium as the Yankees. MLS has to fix NYCFC’s stadium woes soon and maybe get them a bigger banner.

Bouncing back from a poor week two Atlanta United show they are still the best team in the American south. United dominated MLS newcomers Charlotte in the first match up of what the MLS hopes will become a rivalry for years to come. Atlanta had 61 percent possession with 14 shots and eight on target. Charlotte scored its first goal in response to a Josef Martinez penalty as Adam Armour got a piece of a nice corner to score a header. Charlotte looked to pick up its first ever point before a heartbreaking 96th minute goal from Jake Mulraney. Atlanta put in another good showing with 43,000 fans attending, earn the win and look to be clearly one of the MLS East favorites.

Two Western Conference teams with some questions found themselves in a shootout with Seattle running away 3-2 winner over the Galaxy. This was a classic back-and-forth affair with the two sides trading blows. New DP signing Douglas Costa got himself on the scoresheet for the first time with a beautiful freekick, while Xavier Arreaga scored what-turned-out-to-be the winner at the 72nd minute mark. Seattle got outplayed at home again and should consider itself lucky to get a result. A lot of questions remain for both sides.

Dayne St. Clair is turning himself into a start in Minnesota. The 24-year-old Canadian shot stopper put on brilliant man of the match performance against NY Red Bulls. St. Clair kept a clean sheet and made eight saves, including a penalty save as he denied Patryk Klimala from the spot early in the game. Minnesota would go on to win 1-0 following a Luis Amarilla goal but this game is on St. Clair. He bailed the Loons out and is making quite the name for himself. A prayer answered.