How NC Courage Has Changed Heading Into The 2022 Season 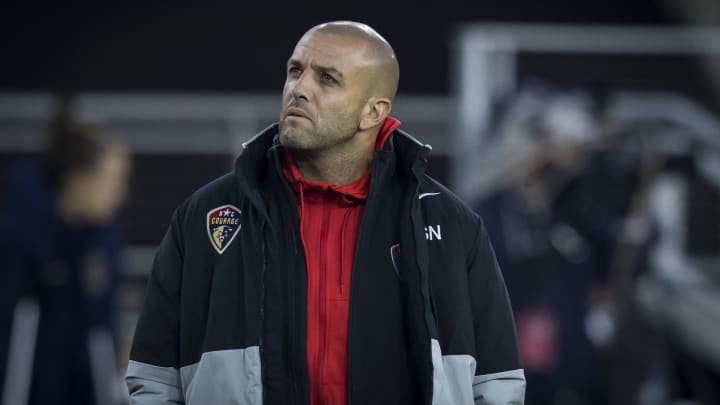 To understand the essence of something, we must explore the basic nature of an event or item. Change has been the essence of the Courage’s offseason. The inherent nature of the team has fully transformed.

One change that occurred was not a complete surprise, but it was never an event that was fully guaranteed to happen. The status of Sean Nahas (pictured) as interim head coach was changed to permanent head coach as his steadying presence during a difficult time for the club proved indispensable. Players sung the praises of his tactical acumen and man management. It was a move that seemed somewhat foreseeable.

The other changes this offseason have been astounding.

Sam Mewis, Lynn Williams, Jessica McDonald, Cari Roccaro, and Angharad James have all departed the club. This offseason has been headlined by a number of veterans exiting. The core of the club has been stripped apart to create space for opportunities for future roster moves and promising young players. The Courage even received the rights for Abby Dahlkemper again after her ‘short-term’ trade to Houston Dash for the remainder of the 2021 season and she was traded to the San Diego Wave on November 22, 2021.

These trades and roster moves left the Courage with tons of allocation money, draft picks, and new players entering the club. Kiki Pickett was sent to the Courage on the other end of the Sam Mewis trade. At only 22 years old, Pickett will give the Courage another option as an outside back for years to come. In that trade, the discovery rights of Malia Berkely of Bordeaux were given to the Courage as well. She is another defender who can provide depth and is only 23 years old.

Other young additions, such as former UNC standout Brianna Pinto, 21, arrived from NJ/NY Gotham FC. On January 10, 2022 two days ago, the Courage added Kerolin, a Brazilian international who played in the Spanish Primera Division. At only 22, she provides versatility to the attack as she can play on the right or down the middle as a striker.

Trades from the offseason left the Courage with the No. 3, 6th, 12th, 29th, and the 45th picks for the 2022 NWSL Draft. Emily Gray, a midfielder from Virginia Tech, was drafted with the third pick. Her stock quickly rose as a potential top 10 ten pick. Scouts were left impressed with Gray’s composure, ball control in tight areas, and her expansive passive range. She has the look of an extremely exciting attacking midfielder. Diana Ordonez, Kaitlin Fregulia, Haleigh Stockpole, and Marisa Bova rounded out a draft class that was considered as savvy by many onlookers.

Another change brought some controversy. Jaelene Daniels, 28, was signed for the 2021-22 season after her hiatus from football. Some fans of the Courage and others followers of the sport voiced their displeasure with the signing. Daniels declined a USWNT national team call-up in 2017 due to the team opting to wear a rainbow-theme jersey for gay pride month. This stance left some supporters perturbed by a perceived lack of inclusion. As a talented left-back, she will provide support to the Courage’s definite first choice left back Carson Pickett.

These changes have birthed the new essence for the North Carolina Courage. A mix of a new young core with tinges of experience sprinkled in.

Here is a list of the departures and incoming players from the offseason:

As preseason draws near, it will be interesting to see how this new essence of players the Courage has created will perform next season. The club looks ready to turn a new page with experience guiding a youthful core into a new season.

Dakwa is a student at Elon University. He writes about soccer in North Carolina for L.A. Soccer Press. Follow him at @JDakwa on Twitter.