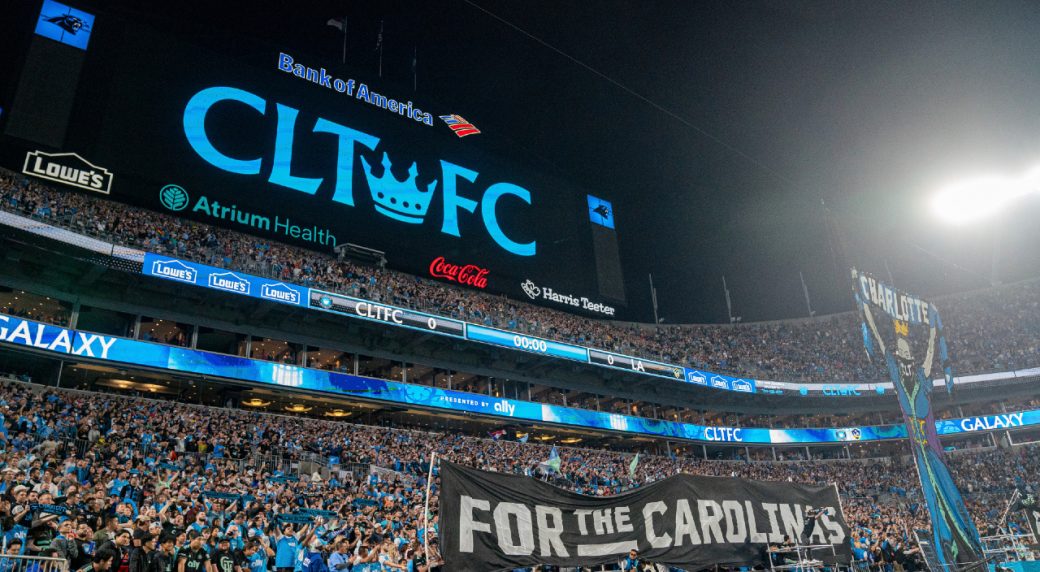 CHARLOTTE, N.C. – In front of a record 74,479 supporters, Charlotte FC fell 1-0 to L.A. Galaxy in the club’s first ever home match after Efrain Alvarez hit a stunning strike to secure a win for the Galaxy at Bank of America Stadium on Saturday.

The attendance broke the MLS league record in a historic night for Charlotte and for the league. There was an electric atmosphere around the stadium that was rooted in the anticipation of Major League Soccer finally coming to the Carolinas.

Charlotte FC forward Yordy Reyna came extremely close to opening the scoring in the 9th minute when he nearly headed home the ball past L.A. Galaxy goalkeeper Jonathan Bond from close range. The ball was quickly cleared off the line to keep things level.

Only 3 minutes later, Reyna made a threatening run in behind the defense and ended up colliding with L.A. Galaxy center back Nick DePuy before attempting to move past DePuy. There were calls from the fans for referee Jair Marrufo to brandish a card, but he did not give a card to DePuy.

In the 19th minute, Charlotte FC goalkeeper Kristijan Khalina pulled off a stunning fingertip save on Javier Hernandez’s curling effort from right outside the 18-yard-box.

L.A. Galaxy created another brilliant chance in the 24th minute when forward Kevin Cabral clipped a ball across the face of goal that Javier Hernandez tried to poke home. Hernandez’s shot from close range ended up drifting wide of the net.

Khalina was forced into action again in the 33rd minute when he had to pull off a crucial double save to keep things level.

In the 40th minute, Yordy Reyna clipped a magnificent ball across the face of goal, but none of the Charlotte FC attackers were able to get a touch to head the ball home.

Chicharito nearly scored in the 56th minute for Galaxy but his close-range header drifted wide of the post.

Khalina once again came to the rescue for Charlotte in the 68th minute after Hernandez directed his shot from 12 yards out in the direct vicinity of the Croatian.

In the 76th minute, Alvarez received the ball with space and carried the ball to the edge of the 18-yard-box. He struck a sensational effort that was directed toward the top corner of the goal and rifled off the post into the back of the net.

L.A. Galaxy still continued to attack as the game progressed and they sought to protect their lead in a hostile away environment.

L.A. Galaxy winger Samuel Grandsir had a brilliant 1v1 chance to increase their lead in the 88th minute to two but wasn’t able to sneak the ball past Khalina.

Rios had an exceptional chance to equalize the match for Charlotte FC in the dying embers of stoppage time but his header ended up being directed straight at Bond.

Charlotte FC’s loss to L.A Galaxy has left the team with no points in their first two matches. Head coach Miguel Angel Ramírez claimed he was extremely proud of his team and was extremely grateful for the environment created in the team’s first ever home match.

“I believe that I am the happiest coach in the world,” Ramirez said. “I would like to thank everyone that joined us in this party. It really was a party. If we had won, maybe we would have continued the party. I believe they [the players] can feel proud today because we were most of the time better than L.A. Galaxy.”

Ramirez believes “focus” was the most important aspect in using the environment to encourage the team tonight. He believes the environment can be used to further the performance of the team in special environments they encountered tonight.

“If we are focused on the game and nothing else, the people will help you to go forward,” Ramirez said.

Khalina believes the environment did not create much pressure, but it created more of an expectation to prepare well.

“I don’t have the pressure,” Khalina said. “I had really good preparation with Andy [goalkeeping coach]. I felt a lot of confidence and I didn’t have pressure.”

Charlotte FC wingback Jaylin Lindsey gave credit to a strong defensive performance and individual performance to the whole club. He credited his teammates and coaches for a reassuring presence at the back for a number stretches throughout the match. He noted the atmosphere was “unreal” as a Charlotte native and he still remembers what it was like watching a Panthers game in the nosebleeds of the stadium 7 to 8 years ago.

Charlotte FC will be looking to get their season back on track after falling on an historic night for the club. Charlotte FC’s next match will be at Atlanta United on March 13 at Mercedes Benz Stadium.