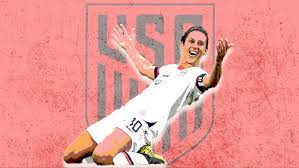 On August 17, Carli Lloyd announced her retirement from professional soccer. She’ll continue to play out the rest of the NWSL season with NJ/NY Gotham FC and four more friendlies with the USWNT before hanging up her boots.

Lloyd has a truly decorated career and will no doubt be in the hall of fame. In 312 appearances with the USWNT, she’s scored 128 goals. Her goal tally is good for fourth in USWNT history and if she finds the back of the net two more times in the next four games she’ll tie Kristine Lilly.

The midfielder has come up clutch in big moments for the USWNT scoring some important goals, we look at the top five goals of her career.

The 2020 Olympics was a disappointing tournament from a USWNT perspective, they struggled throughout but found their form in the medal match against Australia. Lloyd had a challenging angle but made no mistake about it, firing her shot into the bottom of the net. She scored a brace in this one helping the team to a bronze medal.

Lloyd scored the game-winner in the quarterfinals against China. Julie Ertz floats a ball into the box that Lloyd is able to head into the back of the net. It was the breakthrough goal that the U.S. needed to get into the next round on the way to winning the World Cup.

The USWNT were on a mission after losing a heartbreaker to Japan in the final of the 2011 World Cup. They wanted to get back on top and to do that they had to flip the script against Japan. Lloyd got the Americans on the board early with the first goal of the game off of a header. Her second goal of the match was a great individual effort. She dribbled down the field hitting a perfectly placed shot from distance into the side netting lifting the U.S. to the top of the podium.

It was this game when Lloyd really came up big in a huge moment. The U.S. was looking for redemption against Brazil after they were knocked out by Marta and company in the 2007 World Cup semifinals. The match was tied 0-0 going into the double-overtime period until a moment of brilliance from Lloyd. She gets a nice ball laid off to her, takes one touch, and rockets a low shot into the bottom corner of the goal from just outside the box.

This one was a no-brainer at the No. 1 spot, it’s one of the most remembered goals in women’s soccer history. Lloyd picked up the ball in her own half, knocked it past a defender while dribbling just outside of the midfield circle before picking her head up and chipping the keeper. She completed a 14-minute hat-trick with that wonder goal, leading the U.S. to a 2015 World Cup victory. The goal was nominated for a Puskas award as well.