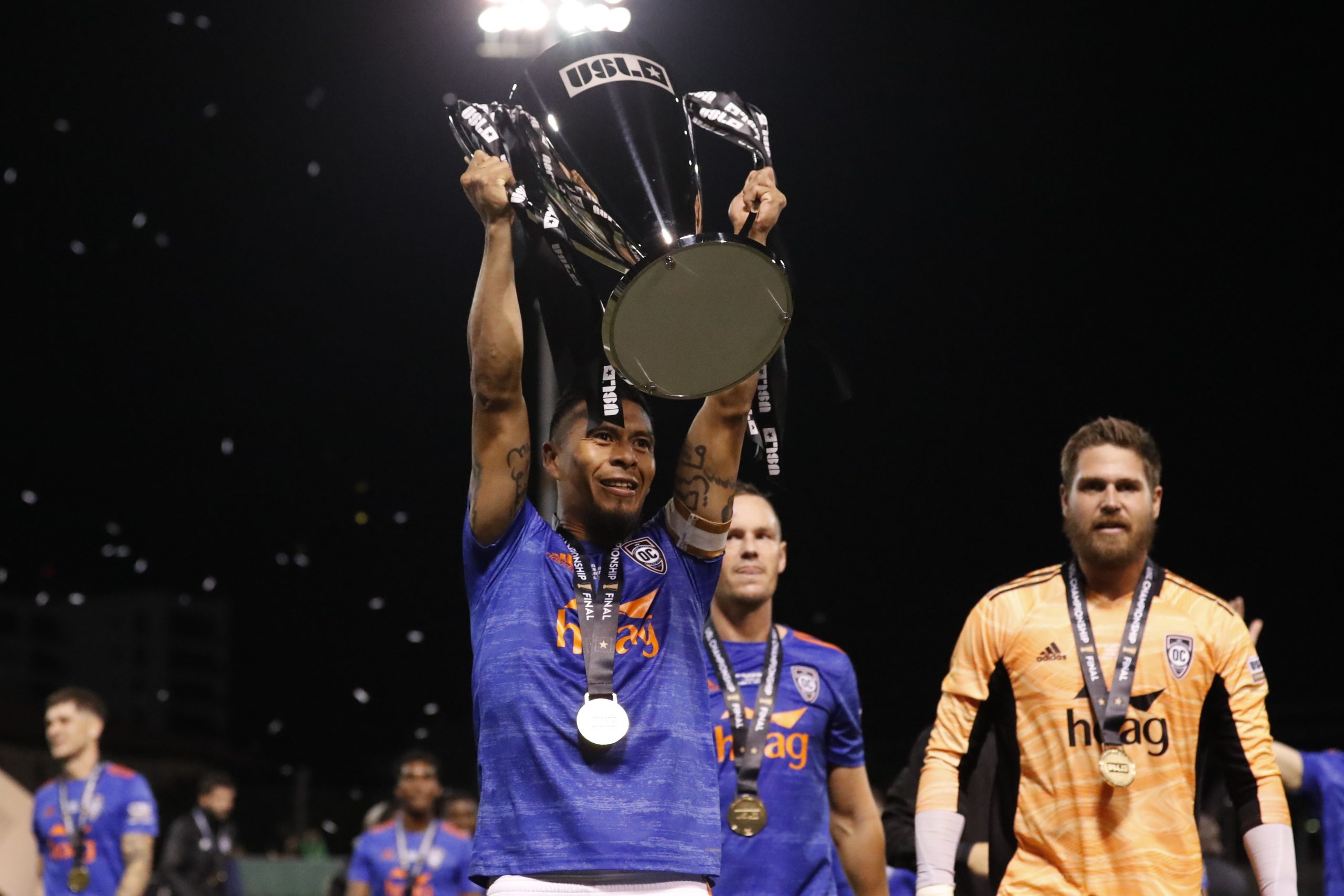 Despite Changing Head Coaches In August, OCSC Makes A Playoff Run And Dominates The Rowdies In The USL Championship Final

Ronaldo Damus led the USL’s champions with a brace, and Mikko Kuningas added a goal on a free kick to lead OCSC to victory.

The game began with the Tampa Bay Rowdies setting the tempo and creating viable chances that sprung OCSC goalkeeper Patrick Rakovsky into action early in the game.

In the 20th minute, Kevin Alston fouled Yann Ekra inside the box as he clipped Ekra’s left leg. Sebastián Guenzatti would come up to take the penalty for the Rowdies.

Rakovsky read Guenzatti perfectly as he leaped to his left and saved the penalty that was meant for the left corner. After the crucial save to keep the game 0-0, the momentum shifted, and OCSC created its own chances.

“I looked how he put the ball down, I obviously [watched] videos about them [prior]. I had the feeling he’s the type of player who crosses his body [when he shoots], so right foot to the left,” Rakovsky said. “So I decided already when he put the ball down to go to that side. Luckily, he didn’t shoot it low or high, so it was a nice ball for [me to save].”

In the 25th minute, OCSC opened the scoring behind a goal from leading scorer Ronaldo Damus, who pounced after Jordan Scarlett made a defensive mistake, picking up a botched pass in the middle of the box and sent a right-footed shot to the center of goal as goalkeeper Raiko Arozarena was out of position.

In the 38th minute, OCSC found its second after a center from Eric Calvillo found Damus in the center of the box. Damus hit a right-footed volley that bounced into the bottom left corner for his second of the game.

In the 44th minute, Calvillo would be fouled by Laurence Wyke right outside the box that set up a free kick for OCSC in the center of the field from about 30 yards out. Kuningas stood over the free-kick and scored a screamer of a goal with a left-footed shot that found the left corner in the 45th minute. Arozarena got his fingertips to it but couldn’t stop the free-kick, or OCSC from going into halftime with a 3-0 lead having scored in all three chances created.

The second half began with the Rowdies pushing forward, trying to find an opening; in the 57th minute, they scored their goal as Dayonn Harris centered the ball into the box from the right-wing. A clearance from Rob Kiernan didn’t go far and landed in the box, and Guenzatti sent a volley to the center of the goal as Rakosvky had his view obstructed and didn’t see the ball.

The Rowdies tried to regain the momentum but OCSC persevered with their defensive awareness, and head coach Richard Chaplow made the necessary changes to keep the Rowdies from gaining ground after the goal as well.

Chaplow brought on Seth Casiple for Brian Iloski in the 64th minute, Thomas Enevoldsen for Tommy McCabe in the 70th minute, Nathan Smith for Brent Richards in the 71st minute, and Sean “Ugo” Okoli for Mikko Kuningas in the 86th minute.

After the final substitution, Rakovsky was called into action again, making a spectacular save on the goal line after a forceful header from Lucky Mkosana.

In the 88th minute, the Rowdies thought they had made it 3-2 after Mkosana converted from inside the box, but he was called offside.

Rakosvky was a force to be reckoned with in the game, standing tall with six saves.

“Halfway through [the season], it’s looking unlikely, [but] we managed to rally and regroup as a team. To give ourselves the playoff spot was massive, and then we just rode the wave, and we continued to get stronger defensively,” Chaplow said. “Tonight, we obviously [took] our chances, so the emotions are ecstasy in a way. Just delighted with the group and what they managed to achieve.”