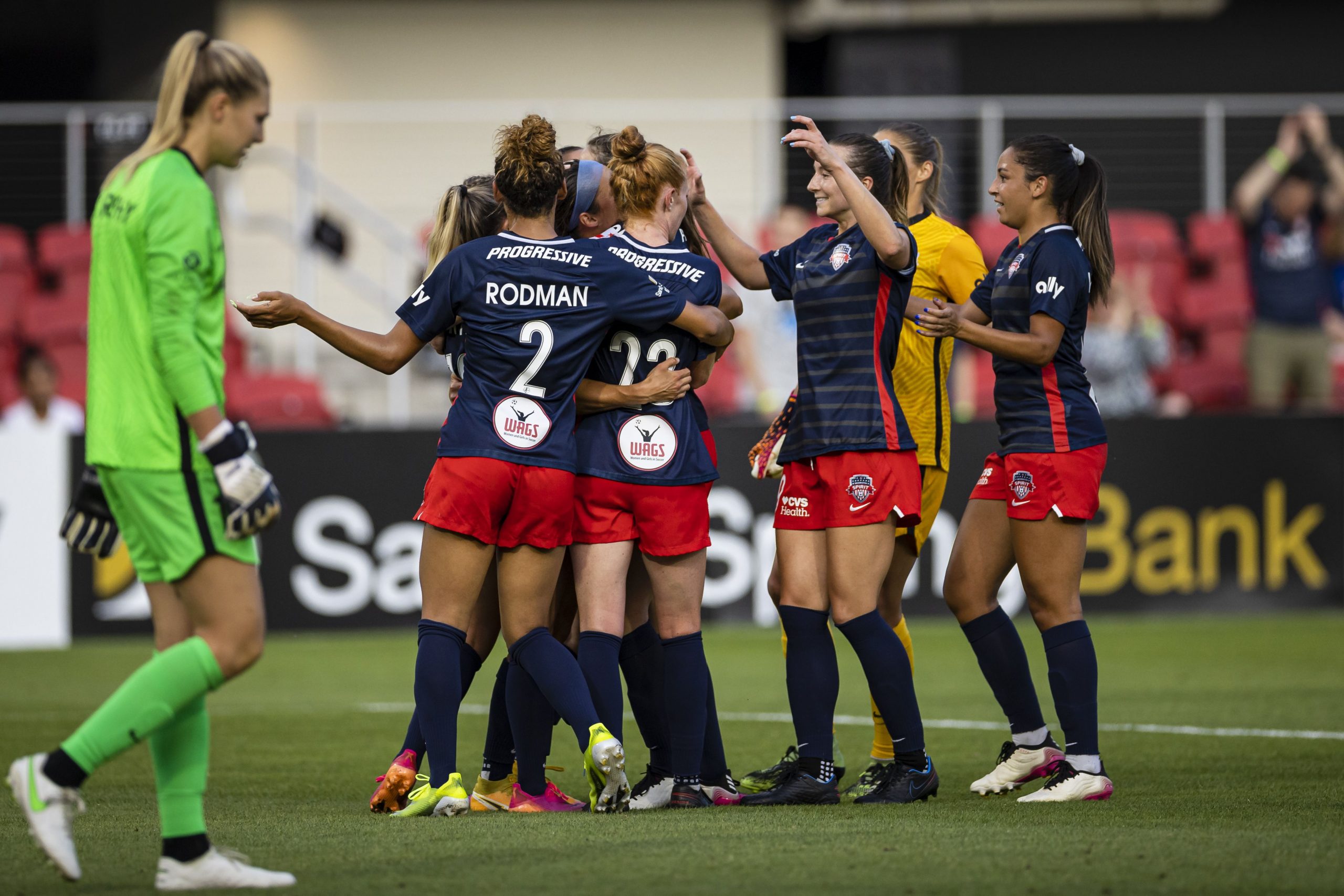 WASHINGTON, D.C. – The North Carolina Courage suffered a narrow 1-0 defeat to the Washington Spirit on Sunday evening at Audi Field after a late goal from Ashley Hatch in the 113th minute of extra time secured the Spirit’s berth to the semifinals.

The Washington Spirit produced a sensational piece of attacking play in the 21st minute as attacker Trinity Rodman cut towards goal and crossed the ball to Ashley Hatch who was nearly able to poke home from right in front of goal.

The Courage continued to grow into the game as their front three of Lynn Williams, Jess McDonald, and Amy Rodgriuez continued to slip into pockets of space. Rodriguez dropped off deeper into a deeper position as a second number 10 to partner midfielder Debinha. The midfielder partnership between the two began to flourish as the first half wore on.

In the 33rd minute, the Courage nearly took the lead after some scintillating link up play from Debinha and Amy Rodriguez. Debinha slipped Rodriguez through and her powerful shot towards the far post forced Washington Spirit goalkeeper Audrey Bledsoe into a difficult save.

Jess McDonald almost gave the Courage a great start to the second half in the 54th minute after she nearly poked home from close range off a well timed cross.

The Courage continued to create great chances and Debinha came inches from giving the Courage the lead in the 61st minute. Her shot curling effort from inside the box smacked off the crossbar and the game stayed level.

Lynn Williams had another gilt edged chance in the 84th minute to put the Courage ahead after the ball dropped to her from a corner, but her shot flew over the bar.

Courage goalkeeper Casey Murphy pulled off a sensational save in the 91st minute of stoppage time to keep the match level and send the encounter into extra time.

At the start of extra time, Murphy leaped to produce another acrobatic save in the 92nd minute and kept the Courage in the match with another superb piece of goalkeeping.

Courage attacker Taylor Smith made a sensational impact off the bench as she was sent through on goal in the 111th minute, but her chance hit the side of the net.

Murphy cemented her place as man of the match with multiple saves down the stretch of extra time. The Spirit continued to create incisive pieces of attacking play that carved out multiple key chances. In the 113th minute, Trinity Rodman got the ball around the edge of the box and worked an angle that forced Murphy into a difficult save. The rebound fell to Ashley Hatch who buried the ball into the roof of the net and Murphy’s seemingly perfect night fell to a position of just excellent.

The Courage tried to muster more chances to find a late goal, but were unable to put the finishing touch on their final passages of attacking play.

After being forced into elimination, the Courage’s loss in D.C marked the end of an emotional season with turbulent circumstances surrounding the club.

Courage attacker Amy Rodriguez expressed her sadness that the team’s season was now over and the chase for another championship was no longer possible.

“The group is devastated, obviously,” Rodriguez said. “With the type of experience and history that this team has, this club has. We set a really high standard. And today we just didn’t meet it. And we’re all really bummed in that locker room. We’re all really upset.”

Courage head coach Sean Nahas believes his team did everything the coaches asked of them, but ended falling just narrowly short in an entertaining and dramatic 120 minutes of soccer. His pride was rooted in what they accomplished throughout such a difficult season.

“The one thing I told the players pregame today was that the playoffs were a blank canvas,” Nahas said. “And, I told them I wanted them to make a masterpiece and they did that. And, they’ve all got their signatures on it. And, sometimes you just don’t win and there’s nothing wrong with that. Because they’ve already won.”

Nahas spoke on Casey Murphy’s notable and memorable performance that will likely go down as one of the most historical matches in NWSL history in regards to goalkeeping. Washington Spirit goalkeeper Audrey Bledsoe made a total of eight saves and Murphy had 13.

“Her [Casey Murphy] performance speaks for itself and how she’s not nominated for goalkeeper of the year is beyond me,” Nahas said. “And, Audrey Bledsoe is a brilliant goalkeeper too. I think you potentially look at the two future goalkeepers of the United States women’s national team tonight. And, Casey Murphy was brilliant for us all year. I’ll just make a trophy for her myself.”

Nahas knows that things will be unknown heading into next season, but is embracing the unexpected nature of the offseason.

“I mean, look, there’s a lot of unknowns,” Nahas said. “You know, the, and I told the group at the end, not to leave with their heads down and be proud of what they’ve done and what they’ve accomplished. And what through all the adversity that we’ve had thrown at us. No one expected us to be in this position.”

“I’m in awe of them,” Nahas said. I’ve said it in my texts and my tweets and all this stuff. And I’ll repeat it until I’m blue in the face. I am in all of this group. But all you can say is keep your head up.”

The Courage will begin their offseason and return to action for the 2022 NWSL Challenge Cup.

Dakwa is a student at Elon University. He writes about professional soccer in North Carolina for L.A. Soccer Press. Follow him at @JDakwa on Twitter.