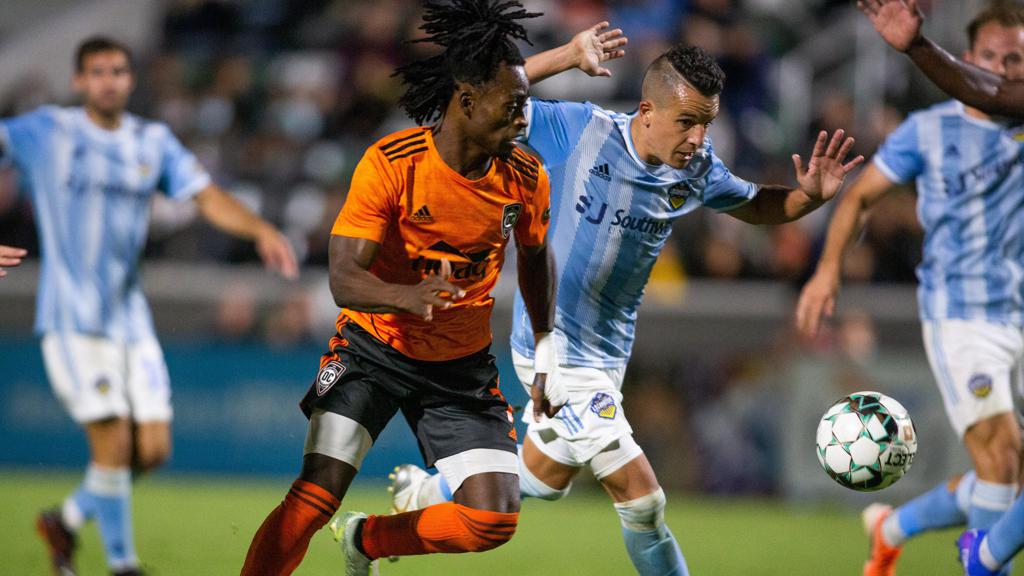 In An Exclusive Interview With L.A. Soccer Press, The Haitian Phenom Discussed His Early Life And Journey Traversing The Professional Soccer Landscape In The U.S.

IRVINE, CALIF. – Ronaldo Damus has made an impression in his first season with Orange County Soccer Club.

It started early but was puncuated about halfway through the season when OCSC head coach Braeden Cloutier was relieved of his duties after a string of harsh results.

Assistant coach Richard Chaplow was named head coach and despite the front office turmoil, Damus continued to score and perform on a weekly basis.

With the help of Damus, OCSC currently sits third in the USL Championship Pacific Division table, and a playoff run is looking likely for the team despite not having officially locked in a playoff spot. The up-and-coming superstar leads the team with 13 goals in 21 USL appearances, and has been the brightest point for the ‘Men in Orange’ this season.

So how did Damus’s career with OCSC culminate, and where does his origin story begin?

Damus was born Sept. 12, 1999, in Hinche, Haiti, and his love for the beautiful game began when he started playing soccer at just six years old when his father enrolled him at the local soccer academy.

The question he is so often asked, “What inspired your name?” was given by his father, who was always a passionate soccer fan and loved to watch Ronaldo Nazario play for the golden generation of Brazilian soccer.

Damus, Sr., was so fond of Brazilian legend that he graced his son with the same name, and the legacy began.

He made his debut for the Haitian Men’s National Team at just 16, playing a full 90 minutes against Costa Rica in the CONCACAF World Cup Qualifying stages on Sept. 3, 2016. He continued to play with the Real Hope Football Academy until 2018, when garnered attention from soccer clubs in the United States.

He made the difficult decision to test the waters in the U.S. professional soccer ranks, spending six months with the FC Dallas Youth Academy in 2018. He impressed at the academy and was named part of the FC Dallas reserve squad (North Texas SC), who compete in the USL League One, the third tier in U.S. professional soccer, under Major League Soccer (MLS) and USL Championship.

At North Texas is where his journey took a drastic turn and where his scoring prowess began.

His performances caught the eye of former OCSC head coach Braeden Cloutier, who liked what he saw and wanted to bring the young striker to OCSC to help the the squad compete for the USL Championship.

Damus had a trial with the club in December 2020 and signed his contract with OCSC on Jan. 5, 2021. It took him a while to sign the contract because getting his visa and paperwork completed took longer than expected due to constraints caused by the pandemic.

Growing up in Haiti, Damus was always around his family and his friends. His whole family lived in the same house, and they saw each other every day. Leaving his family, his girlfriend, friends, and the country he grew up in was very hard for the young striker.

OCSC has attempted to get visas for his family and girlfriend to be here with him to support him but regulations set in place during the pandemic have made it close to impossible.

Damus, even through this adversity, has performed stellarly for OCSC since the start of the season.

Damus arrived just two weeks before the start of the 2021 USL Championship season. It didn’t take him long to get acquainted with the back of the net, scoring his first goal against Sacramento Republic FC in a 3-1 victory only three games into the season.

It was like an instant click between the man and the club, and there’s a reason why: Damus chose OCSC over other clubs because he aligned with the philosophy and play style that OCSC has as a club. OCSC has emphasized its philosophy to always be prepared; its physical conditioning program is one of the most rigorous in the USL Championship.

Damus said the club’s philosophy helps him to stay fit during stretches of the season when OCSC has become very busy, sometimes playing three games in one week. But most importantly, it’s the playing style that attracted him most to the squad. OCSC emphasizes keeping possession of the ball and creating quick and crafty counterattacks after recovering the ball on defense.

Damus fit into this system perfectly, scoring in the next four games after his first goal against Republic FC.

He left the squad at the start of July after selection to play with the Haitian National Team at the CONCACAF Gold Cup.

Haiti had an early exit in the Gold Cup, so Damus returned to OCSC at the end of the month and was immediately re-inserted into the lineup. In his first game back, Damus scored against Sacramento Republic FC in a 2-2 draw on Sat., July 24.

Since that game against Republic FC in the latter part of July, Damus has added six more goals to his tally with no signs of slowing down.

Damus has a lot of appreciation for the club that has provided him with the opportunity to improve his skills as a soccer player. His goal for the remainder of the season is to help OCSC win the USL Championship and add some silverware to his trophy cabinet.

Damus said his goal beyond this season is to achieve his dream of playing soccer in Europe. OCSC has a partnership with Scottish side Rangers FC, which may be his next step.

If he can continue to score goals and perform every week, it won’t be long before Damus is netting screamers for Steven Gerard’s side in the Scottish Premiership.

Bonetto is a student at CSU Long Beach. He covers Orange County SC for LA Soccer Press. Follow him at @tristanbonetto on Twitter.