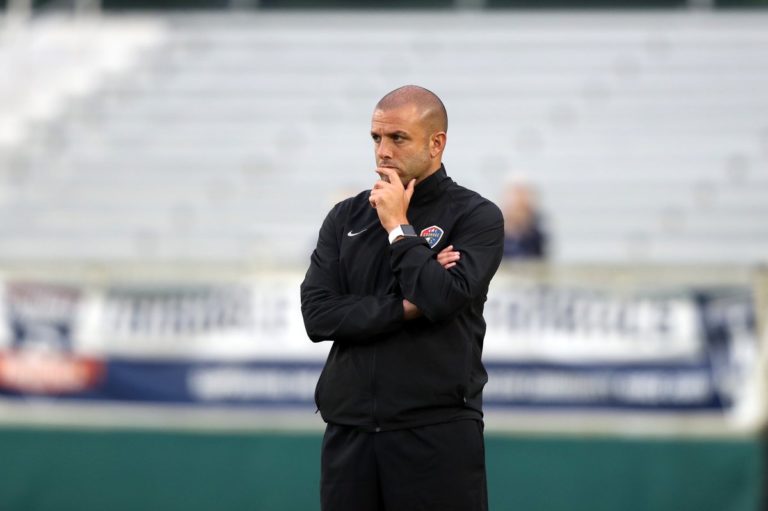 Nahas Wants His Players To Sticking Together Amidst The Difficult Circumstances

CARY, N.C. – NC Courage interim head coach Sean Nahas spoke to the media ahead of the team’s match against the Houston Dash on Sunday, Oct. 10.

In his first media appearance, Nahas voiced his concern about the importance of his players sticking together amidst difficult circumstances. In the lead up to and after the Courage’s 3-1 victory in their previous match against Racing Louisville he spoke to the players about he wouldn’t want to be coaching any other group of players.

“I told them how much I loved them,” Nahas said. “It was about us. It was about us coming together as one. So when we walk out of that tunnel, make it about us.”

As the NWSL continues to take steps forward in creating a safer league, Nahas spoke about how wished the league received more attention for all the positives that occur as well.

“The extra attention has been interesting,” Nahas said. “Sometimes, it upsets me that the league gets the attention in these types of situations. They are world class players, but they are also world class people. And, I wish that more of the attention would be brought to that. People keep using the word deserved, but I feel that it’s owed that the right type of attention is given to them.”

In the aftermath of such a difficult week for the club on an emotional level, Nahas gave the media insight on what he has been doing training to prepare the team for their match tomorrow.

“We’ve really tried to lighten the mood within training,” Nahas said. “Playing is their outlet so we didn’t want to add any extra stressors to that. It’s been nothing heavy, just enough information so they can take it all in.”

Nahas has been focused on trying to steer the team to an even higher position in the table through refocusing on improving the team’s weaknesses and individual qualities. With the race for playoff places continually being contested, only five points separate the Courage and the Orlando Pride in sixth place.

Nahas expressed the fact he doesn’t know how his team will respond in their future matches, but he believes his players are an extremely professional group.