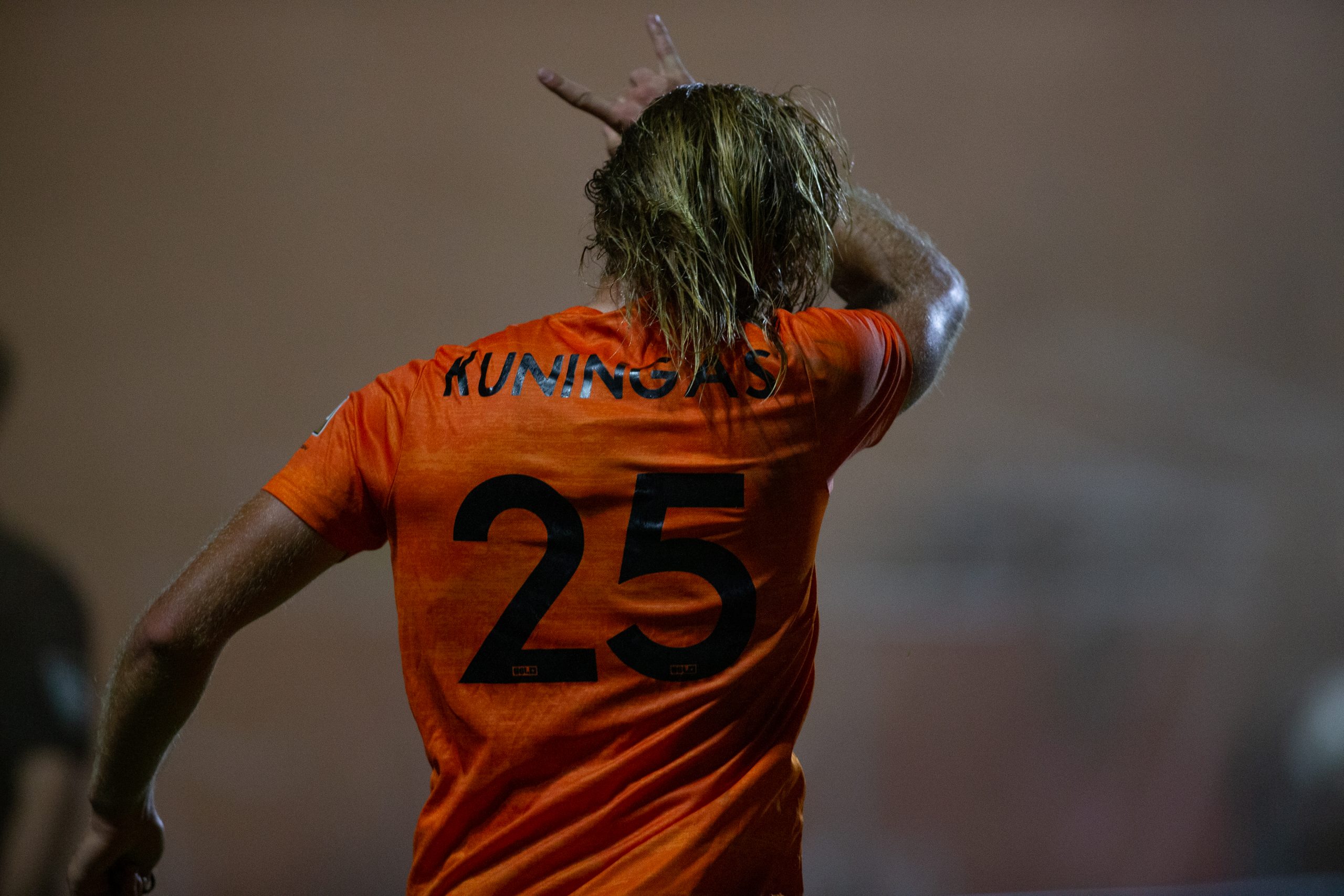 IRVINE, Calif. – Orange County SC showed up for its home supporters on “Fireworks and Fenders Night”, scoring a triumphant 2-1 win against Oakland Roots SC on Saturday night at Championship Stadium.

Michael Orozco picked up his first goal of the season, and Mikko Kuningas scored a game-winner at the death to help Orange County take three points and continue its run to the USL Championship playoffs.

Eric Calvillo was present on the sidelines but was not available for selection as he played for El Salvador in a friendly match against Guatemala on Friday, Sept. 24.

Ben Mines got his first start for OCSC; Mines was acquired on loan from Cincinnati FC in mid-August. Brent Richards and Michael Orozco were called into duty early in the game with some headed clearances.

In the 19th minute, Mbumba would open the scoreline for the visitors after some cheeky stepovers left him enough space from Richards to shoot the ball as the low-driven shot went through Richards legs and found the bottom right corner.

Nine minutes later, in the 28th minute, Johnny Rodriguez almost scored on a wide-open goal, but the sliding Michael Orozco blocked the shot.

The game went back and forth with viable chances for both sides; Ronaldo Damus had two opportunities that looked promising. In the last minute of the first half, a foul by Ariel Mbumba on Dillon Powers gave OCSC a set-piece from the right side of Roots SC’s box.

A centering pass from Brian Iloski found the head of Orozco on the left side of the box, who sent a low-driven header towards the goal as it bounced into the right corner. OCSC had drawn level at the tick of halftime.

The second half started and it was clear that OCSC was fired up and had the momentum on their side. Mines had a chance after he cut inside from the left side of the box, but he couldn’t get a clean shot off as it rolled into Paul Blanchette’s hands.

OCSC manager RIchard Chaplow had to devise a plan to hold on to the draw and try to go for the victory. In the 67th minute, Chaplow decided to bring on Mikko Kuningas for Tommy McCabe; Kuningas would come on and provide the defensive support they needed to salvage the point and aid in the attacking support to try and find a game-winner.

Richards went to center the ball in the 1st minute of stoppage time, but it got blocked by Akeem Ward for a corner. Iloski came up to take the corner as he curled one in that looked like it was going past the mark.

Then out of nowhere, Dillon Powers saved the ball from going out on the left side of the box and threaded it back in for Kuningas, who was in the perfect position to tap in the winning goal from very close range. Kuningas and the other OCSC players ran over to celebrate his late-game heroics with the County Line Coalition supporters group under a cloud of orange smoke.

The game began again as the referee blew the final whistle and a sigh of joyous relief reverberated throughout Championship Stadium, knowing OCSC had just picked up a vital win in their quest to lift the USL Championship trophy.

“Yeah, a little bit of both really, I think Mikko’s qualities obviously everybody knows what they are with the ball. Defensively [he] can offer another physical presence which I thought when he came on, he performed [very] well,” Chaplow said about whether he put Kuningas on for offensive or defensive support. “He came on and played his role perfectly well. I thought he added some quality to the midfield and also a little bit more extra energy, which we were lacking.”