Gold Cup Preview: Can United States’ ‘B’ Team Get To The Final? 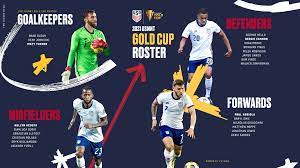 Fresh off of their CONCACAF Nations League victory in June, the United States Men’s National Team looks to pick up another piece of hardware in this year’s edition of the Gold Cup.

Set to open the competition on Sunday, July 11 against Haiti in Kansas City, the USMNT is looking to make their third straight final in this competition.

The U.S. was drawn into a group that features two favorites – the United States and Canada – and two teams battling for third place in Haiti and Martinique. All three of the United States’ games will be played at Children’s Mercy Park in Kansas City, making the schedule quite favorable. The U.S. does not have to play Canada until the third group game, where by both should have six points and be comfortably on to the knockout round.

Should the U.S. get out of the group, the team will play one of the four Group D teams (Honduras, Grenada, Panama and Qatar) in the quarterfinals.

Haiti, which reached the semifinals in the 2019 Gold Cup, could cause a scare on Day 1. The team is led by striker Duckens Nazon, the nation’s leader in caps (44) and goals (23). Nazon currently plays for Sint-Truiden of the Belgian Pro League. Haiti also features an MLS player – Derrick Etienne of the Columbus Crew.

As for Martinique, the French overseas territory hopes to provide a shock or two at this summer’s tournament. The squad features mostly those playing in the Martinique First Division. A few players feature in the second tiers of football in Spain, Italy and France.

Canada could pose a threat to the U.S. considering Canada shocking 2-0 victory in October 2019. That win continues to be a famous one for Canadian soccer as its men’s team had not defeated the U.S. in 34 years.

The United States’ norther neighbor will look to pull off a similar result this time around. Canada’s squad is headlined Alphonso Davies, widely considered to be one of the best fullbacks in world football. The 20-year-old Bayern Munich phenom continues to impress as he cements himself as one of the global game’s most versatile players. Davies scored in that famous 2-0 win over the U.S., and his addition to adds star power and name recognition to a team already featuring solid European-based players like Cyle Larin and Junior Hoilett.

This USMNT squad has been considered a “B” team by some, but it gives a lot of players an opportunity to impress prior to World Cup Qualifiers. Nineteen of the 23 players currently play for MLS clubs, while Reggie Cannon and Matthew Hoppe highlight those players playing abroad.

Gregg Berhalter will have the chance to experiment with a range of players, and there will be some who play their way into the World Cup qualifiers squad for September. In fact, it’s likely there will be wide variety of squads used during the tournament.

Hoppe is a name to look most out for as Berhalter has called him up multiple international breaks but has yet to give him a cap. The Schalke FC man hopes to put in a good show as he hopes for a move away from the relegated German side.

L.A. Galaxy attacker Sebastian Lletget hopes to keep scoring for the U.S. (two goals in his last five games for the US) while Man of the Moment Daryl Dike, who recently scored his first international goal in June, hopes to get some minutes. MLS veterans Walker Zimmerman and Brad Guzan will be the leaders in this group.

This squad is significantly weaker than the one which beat Mexico in June, yet making the final should be the expectation.

The wave emotion after beating Mexico to win the CONCACAF Nations League was palpable. Now it’s up to this group keep up the momentum and win another trophy.

Robbins is a native of New York City and a student at University of Alabama. He writes about Major League Soccer and the U.S. Men’s National Team for L.A. Soccer Press.