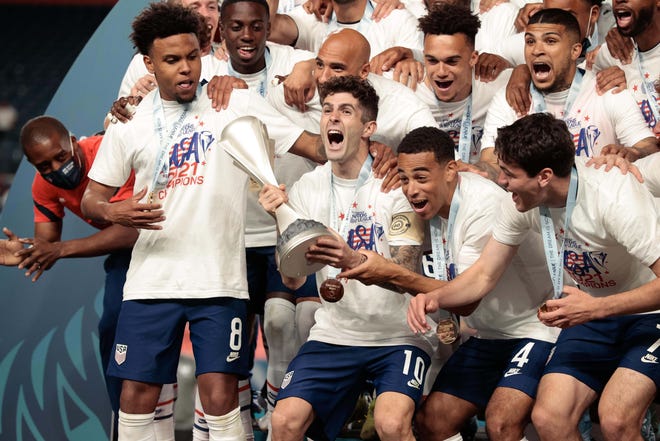 It may be hyperbole to say that this is a defining moment in U.S. soccer history, but on a gorgeous Sunday night in Denver, CO, the United States Men’s National Team defeated Mexico 3-2 in extra time in one of the wildest games anyone may ever see.

Tied 1-1 in the second half, the tenor of the game changed in the 69th minute when goalkeeper Zac Steffen had to be subbed off because of an injury to his left leg. The cause or extent of the injury was unclear, but Steffen limped off the field and spent the rest of the game with ice wrapped around his knee.

Ethan Horvath entered the match for Steffen. A native of Highlands Ranch, CO – a suburb of Denver – Horvath was quickly given the chance to prove himself on his own turf.

Horvath made save after save as Mexico applied pressure. and was shielded when Mexico’s Diego Lainez scored in the 79th minute to take the lead. He would more than make up for it with a game-saving stop in the 124th minute.

Clinging to a 3-2 lead, a VAR decision correctly identified deliberate handling by defender Mark McKenzie in the penalty area.

Nerves were tight as Andres Guardado stepped up take the penalty, but Horvath guessed correctly, dove to his right and pushed the ball away with left hand to make the save.

The U.S. took the lead after Pulisic was fouled in Mexico’s penalty area in the 114th minute. While the referee did not whistle the play, the Virtual Assistant Referee (VAR) reviewed the play and determined that the left leg of the Mexican defender made contact with Pulisic, bringing the U.S. captain down before the right leg made contact with the ball.

Captain America stepped up and blasted the ball into the top right corner of the net past Mexican goalkeeper Guillermo Ochoa.

Prior to the wild antics in extra time the CONCACAF Nations League Finals had been underwhelming for the U.S.

The team squeezed by Honduras in the semifinals, 1-0, on the back of great last-minute winner from Jordan Siebatcheu, whose diving header in the 89th minute advanced the U.S. to the title game.

The final was wild up to the last-minute penalty drama as the U.S. fell behind twice before climbing back. Jesus Corona opened the scoring in the 2nd minute and a 2-0 lead looked certain on a goal from Hirving Lozano until a VAR check determined Lozano was offside.

The call seemed to change the momentum, and the U.S. marched down the field to score in 27th minute with a well-timed tap-in from Gio Reyna after Weston McKinnie’s header bounced off the post and into Reyna’s path.

Mexico scored in the 79th minute to take a 2-1 lead but the US responded with a goal in the 82nd as Weston McKinnie used his head to score off of a set piece to tie the game.

This game will be remembered for many different reasons. From the VAR checks, to Pulisic scoring, to Horvath’s save, to bottles being thrown on the field, to topping Mexico in a final to win a trophy – all of it is enough to fill a display case in the U.S. Soccer Hall of Fame.

Finished off with a trophy for the youngest USMNT starting XI to ever play in a tournament final, this victory will be an important marker as the team attempts to qualify for the 2022 World Cup in Qatar.

Nick Robbins is a native of New York City and a student at University of Alabama. He writes about the U.S. Men’s National Team and Major League Soccer for L.A. Soccer Press.