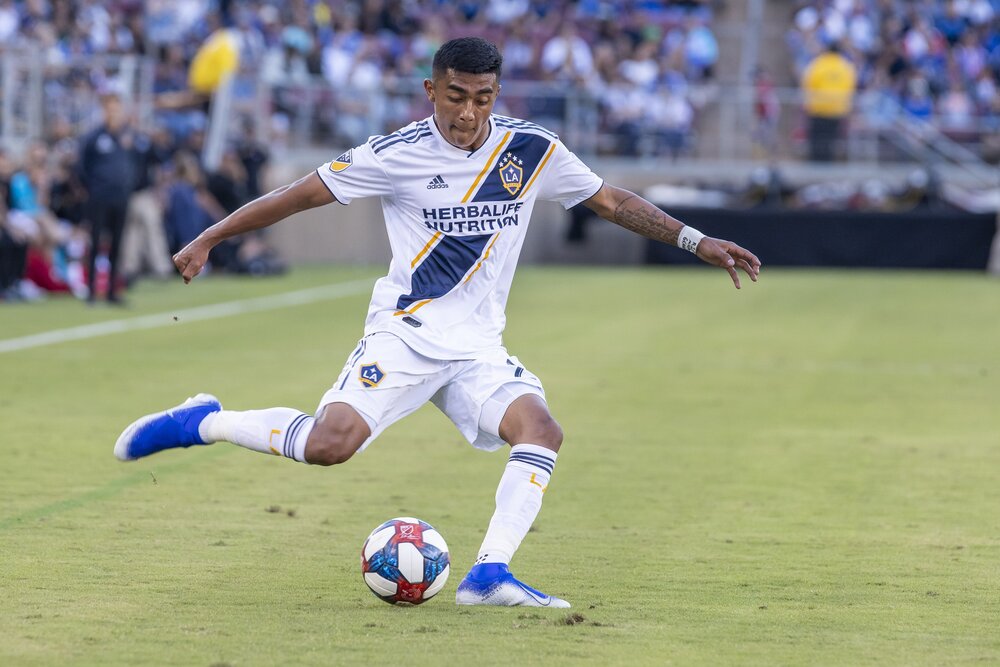 Julian Araujo Carries His Connection To California Every Time He Steps On The Pitch To Represent L.A. Galaxy

Julian Araujo, a 19-year-old defender for Los Angeles Galaxy (MLS), grew up in the Lompoc Valley, an area south of Santa Maria on California’s Central Coast.

Its many agricultural fields are known for growing flowers, vegetables, and wine grapes.  His father, a farmworker, sacrificed and struggled to provide food for others and give Julian a life with more options than toiling in the fields.

As Araujo has matured, he has made public his appreciation for those sacrifices. He has vowed to remember the farmworkers from his home who are still laboring even during a pandemic, to put food on the table for others.

Since becoming a professional player, Julian Araujo has consistently given back to Lompoc. In 2020, he donated food to Dignity Health Urgent Care in Lompoc. Last month, he returned to Lompoc again to give out gift cards, food, and protective equipment to farmworkers and other people in need.

“I made a decision that when I was a professional, I would use my platform to show support for farmworkers and amplify the struggles they face, They deserve more than they get,” Araujo told the L.A. Times.

Farmworkers in California perform exhausting work as they hand-pick crops in all conditions for California’s minimum wage ($12-$14) an hour. A recent study from the UCLA Center for the Study of Latino Health and Culture tallied COVID-19 fatalities and noted that deaths have quintupled in the Latino community as many of them, including farmworkers, are essential workers.

Araujo’s maturity off the pitch seems connected to his gratitude for LA Galaxy executives acquiring him in a trade with the Colorado Rapids and for his parents, who have sacrificed to give him the chance to represent the Galaxy. Araujo grasped that opportunity with both hands and has become an emerging star in 2020.

Araujo spoke about how grateful he was in an interview with Los Angeles Daily News in 2019 after making his debut at the age of 17.

“I knew this was the place where I wanted to start my career,” Araujo said. “I knew this was going to be the best development for me. Signing my first contract with the Galaxy is a dream come true. It’s all I’ve ever wanted.”

The right back was called up to the annual U.S Men’s National Team training camp in January. By December, he made his debut with the USMNT as a starter against El Salvador in a 6-0 victory. Throughout the year, Araujo made 17 appearances with the Galaxy. His performances last season earned an award as LA Galaxy Defender of the Year. His off-the-field efforts were recognized as he was named LA Galaxy Humanitarian of the Year as well.

Araujo’s physicality and aggression helped him to defend courageously for the team. His quickness and ability to read the game at a high level help him win the ball and turn defending situations into attacking scenarios. His work-rate and determination have impressed USMNT national team manager Gregg Berhalter.

Berhalter gave his thoughts on Araujo’s strengths in an interview with MLSSoccer.com before the match against El Salvador.

“Julian’s an example of a guy that you want on your team,” Berhalter said. “He’s a guy that goes out and puts everything on the line every time he’s playing, and that’s what we like about him. We see him as a fullback, and we want our fullbacks attacking, we want them to be aggressive. We’ve been really excited about Julian, we really like his game, and we think it will translate well into what we do.”

Araujo’s spectacular play has drawn interest from Europe’s top-flight clubs like Tottenham Hotspur and Juventus. Tottenham were reportedly preparing to make a €5 million bid for Araujo during the winter transfer window. Juventus has made no official offer but has shown interest in the player.

Araujo’s success has continued into 2021 as he was added to the U-23 national team camp in January after defender Bryan Reynolds departed for personal issues.

As Araujo continues to develop in 2021, he will most likely continue to garner more interest from Europe and around the world.

But he will never forget the sacrifices of his parents and what home means to him.

For Araujo, home means selflessness. And at only 19 years old, he understands this is now his turn to be selfless for his parents and community.